JUNE & JULY
Tour of UK and Europe (with Tyrone Downie on keys in stead of Bernie Worrell).

SEPTEMBER
Released 'Close To The Bone' LP with first single 'Pleasure Of Love', accompanied by video.

DECEMBER
Released second single 'The Man With The 4-Way Hips'.

JULY
Moved to New York to continue recording basic tracks with Chris (drums, percussion and vocals), Mark Roule (guitars and percussion), Steve Scales (additional percussion), Eddie Martinez and Glenn Rosenstein (guitars on 'Born To Love' only), Jay Berliner (Spanish guitar on 'Broken Promises'). Finished recording 'Devil, Does Your Dog Bite ?' which had begun in January for the film 'Married To The Mob', released in August 1988.

1991 JUNE-AUGUST
Toured clubs in the US in the Escape from New York Tour, along with Deborah Harry, Jerry Harrison and The Ramones

1992 JUNE
Released the album 'Dark Sneak Love Action' in the US. Two singles were taken off this album and released on CDsingle and 12" containing a bunch of funky remixes: 'You Sexy Thing' (a cover of the hot Chocolate song) and 'Sunshine and Ecstacy'

1998 OCTOBER
Tom Tom Club did a small tour in the North-East of the USA with Charles Pettigrew, Bruce Martin, Steve Scales and Robby Aceto.

2000 MAY
Tom Tom Club contributes a cover of Donna Summer's "Love to Love you Baby" to the Georgio Moroder tribute album.

2000 JULY
Advance copies of the new album "The Good the Bad and the Funky" change peoples lifes. And this is only just the beginning... On September 12 the album will be officially released, and Tom Tom Club is better than ever!

2000 OCTOBER
The band will tour through the USA with Mystic Bowie as temporary singer. Stay tuned for tour dates ! 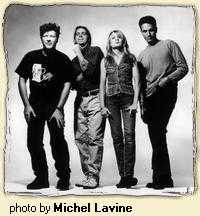