Tom Dice (born Tom Eeckhout in Eeklo on 25 November 1989) is a Belgian singer-songwriter, who finished second in the Flemish version of The X Factor in 2008. Dice represented Belgium in the Eurovision Song Contest 2010 final on 29 May in Oslo. Tom Dice ended up in sixth, one of Flanders best placements ever in the contest. Dice was also the first Belgian act to qualify for the final since the introduction of the semifinals in Eurovision.

Dice learned to play the guitar as a child, began songwriting in his early teens and at the age of 15 joined band The Dice, using Tom Eeckhout Dice as his stage name. In 2008 he entered the Flemish X Factor and, with Maurice Engelen as his vocal coach, finished runner-up to Dirk De Smet.

Following X Factor, Dice became the first signing to new label SonicAngel, and in June 2009, now under the name of Tom Dice, released his first single, an acoustic cover of Leona Lewis' Bleeding Love. The single went on to reach number 7 on the Flemish singles chart during a 14-week chart run. Dice received a nomination in the 2009 TMF Awards in the category "Best New Artist", losing out to Jasper Erkens.

In May 2009, Dice began working, again with Engelen, on his debut album, which was originally scheduled for an October 2009 release, but has yet to be issued.

On 25 November 2009, Dice was chosen by the Flemish broadcaster Vlaamse Radio- en Televisieomroep (VRT) to represent Belgium at the Eurovision Song Contest 2010 in Oslo, Norway. His distinctive voice and TV experience were cited among the factors behind his selection. Reaction in Belgium to the announcement that Dice had been chosen by internal means was mixed, with some feeling that an open and public selection involving different artists would have been preferable.

The chosen song "Me and My Guitar" was unveiled on 7 March 2010, and was co-written by Ashley Hicklin, Jeroen Swinnen and Dice himself. The song went to number 1 in Belgium, both on the iTunes chart and on the official Flemish and Walloon charts; it also reached number 7 in Luxembourg. Dice performed the song in the first semi-final in Oslo on 25 May 2010 and qualified for the final, in first place, making him the first Belgian act to do so in 6 years. Tom Dice finished in sixth place, one of Belgium's best placements in the contest. 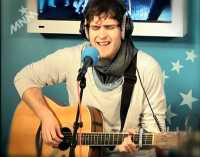