The Toadies formed in early 1989 in Fort Worth, Texas. All four of the original members worked at the Sound Warehouse record store on Camp Bowie in Fort Worth. The first lineup was: Todd Lewis (vocals and guitar), Charles Mooney (guitar), Lisa Umbarger (bass) and Guy Vaughan (drums).

Their first show was at the Axis Club in Fort Worth on April 23, 1989 opening up for Burning Temple (whose bass player was Darrel Herbert) and Anonymous Dog. As Guy Vaughan was just filling in on drums temporarily to help out the band, his tenure lasted about a month and was replaced by Terry Valderaz. At this point, "Slaphead", their first demo, was recorded and was made available at their shows.

Terry played with the band until the Axis Club (the only club where they could get a gig; playing Dallas at the time was out of the question) was forcibly shut down by Fort Worth's finest in the summer of 1989 (the Toadies were actually on stage when this event occurred). This led to a period of inactivity as there was nowhere else to play in Fort Worth and the connections to play in Dallas hadn't yet materialized. At this point, Terry was let go and was replaced by Michael Moore (now Michael Jerome) who split playing duties with the Toadies and Pop Poppins.

Quite a few songs were written in this short period including "Possum Kingdom" as well as "Dig A Hole" and "I Hope You Die" (which was released as a 2 song cassette single). Through the help of people in the Dallas scene like Jeff Liles (a local booking agent and recording artist in his own right having earned a gold record for the song "SixGun" on the "Colors" soundtrack with his group Decadent Dub Team and who now presently records under the moniker of Cottonmouth TX) and from bands like Last Rites and the Buck Pets, they were able to get gigs in Dallas thereby gaining more exposure. When Michael was given an ultimatum by Pop Poppins to choose one band or the other, the search was on for a new drummer. Matt Winchel became drummer number four and at about the same time Todd put away the guitar and began handling only the vocal duties.

After placing an ad in the Dallas Observer (a local free paper) and holding auditions, Tracey Sauerwein was chosen to handle second guitar duties and the Toadies became a five piece. In October 1991, Matt was replaced by Mark Reznicek, who had played with Tracey in a band called "In The Midst".

With the lineup intact for the first time, things began to take off as they received national television exposure as finalists in the Yamaha Battle of the Bands (they placed second to a New Jersey reggae band called the Tribulations) and also as finalists in MTV's Battle of the Bands (which earned them a free trip to play at Daytona Beach, Florida for spring break). With the money earned from the Yamaha contest, they went back in the studio and released "Velvet" (a cassette only release) on their own. On the strength of "Velvet" they were the first band signed to Grass Records, an independent label based in New York. In spring of 1992, Grass released the CD EP "Pleather" as well as "Mr. Love/I Burn" on yellow vinyl 7". This lineup remained stable until the summer of 1992 when Tracey, after having some problems with the band, was replaced by Darrel Herbert on guitar.

Getting noticed by Interscope Records in 1993 came about by a strange chain of events. Mark's cousin, who owns a record store in Portland, Oregon, played "Pleather" for some reps at Valley Records, a huge outlet that stocks special orders for record stores across the country. Impressed, they played it over the phone to Ray Santamaria, who had just been promoted to A&R at Interscope Records. This prompted Ray to fly out to Texas to personally check out the band. After seeing them play live, he had them come out to play a showcase at the Whisky a Go-Go in Hollywood, California. By now there were quite a few interested labels but after the show the band chose Interscope and informally sealed the deal by handshake with Ted Fields, co-owner of Interscope. What made the situation even stranger was that Charles Mooney, the original guitarist, had quit right before the label interest occurred, leaving Todd about a month to relearn the guitar parts as he moved back to the simultaneous handling of guitar and vocals.

In the fall of 1993, the Toadies began recording "Rubberneck" with Tom Rothrock and Rob Schnapf producing. After continually getting the shaft by Interscope pushing ahead the release date, (it was originally supposed to come out in February 1994) the Toadies played numerous shows in the Dallas/Ft. Worth area to keep the bills paid (Mark even took in a day job, working at a local comic book store). "Rubberneck" finally saw the light of day in August of 1994 in which they played a free show at Trees in Dallas. An official midnight release party was also held at Madhatters in Ft Worth 2 days later in which the first copies were sold and a bootleg video of the previous Trees concert was shown as well as sneak previews of their "Mister Love" and "Backslider" videos.

Their first tour (which consisted of the four members and their equipment in a van with Todd's ex-girlfriend driving) was with Samiam which lasted about three months. They returned to play a Thanksgiving gig at Madhatters that had probably as many people outside trying to get in as there were inside (it was estimated that they stuffed about 400-500 people inside that night). They also went on an ill-fated tour with the Goats and Big Chief which only lasted a few weeks.

In February, they went back on the road with recent Interscope additions Bush who at the time, had just released their first album and were starting to gain attention but were nowhere near the point where they are now. This tour led to interesting situations from having to put up with Bush's uptight tour manager to driving through the winter months in a van with everyone being sick at one point or another during the trip. One perk however, was to get their first national TV gig of the tour by playing on the now-defunct "John Stewart Show".

After the Bush tour, the Toadies returned home to play some shows and to record their third video "Possum Kingdom". At this point, they hadn't received much airplay (not even in the Dallas/Ft Worth area) and weren't sure how long their relationship with Interscope was going to last. Nonetheless, they went back on the road with labelmates All for a short tour. Around the same time, due to assistance and persistence from a couple of visionary radio program directors as well as their manager, "Possum Kingdom" began to take off on the airwaves and soon landed them in regular rotation on MTV.

Once again they opened up for Bush, but now they were able to trade in the van for a tour bus and also managed to get a traveling soundman and tour manager. They were now starting to get noticed by larger crowds, with sales of "Rubberneck" averaging 15,000 to 20,000 units a week. Around this time, Grass released the "Belated Valentines" 7" which was a split with former Grass labelmates Slowpoke. Almost immediately after the Bush tour, they went back out on the road, opening up for White Zombie.

By early 1996, sales of "Rubberneck" exceeded the 500,000 mark, scoring the band a gold record (though they wouldn't be presented with them until months later). After taking another quick breather and making two attempts at filming their fourth video "Away" (the first effort with Devo's Jerry Casale directing was scrapped), they again left to tour with the Red Hot Chili Peppers. Soon after the Peppers tour, they filmed their fifth video for "Tyler" and were back on the road with fellow Texans the Reverend Horton Heat and the Butthole Surfers.

Soon after the tour, it was mutually agreed upon that Darrel would leave the band after completing their already scheduled shows. Without anyone except the band knowing of their present situation, the Toadies played their last show with Darrel headlining at the "Zozzle Fest" at Frawley Stadium in Wilmington DC on September 14, 1996. The remaining three then took off for Hawaii for some much needed R&R.

After returning home, they played a short set at Trees as a three piece for the One Ton Records "Grease" cover album release party (the Toadies cover "Beauty School Dropout" on the record) and proceeded to hold auditions for a new guitarist. Their choice was Clark Vogeler (whose previous band Funland had broken up a month prior after releasing an EP "Sweetness" on Arista Records, "Misunderstanded", a cassette-only release sold by the band, and "The Funland Band" on Steve Records, a local Dallas label). After buying new equipment as he'd sold all of his previous gear, not planning to pursue music for a while, he began rehearsing with the band. By the end of 1996, "Rubberneck" had sold over 1,000,000 copies, making the Toadies platinum record owners. 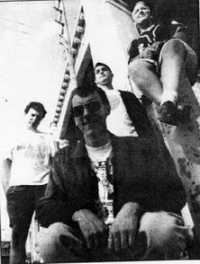