Tiziano’s music is contemporary, energetic and passionate - he is Italian after all!

Europe is currently preparing the launch of the album. His first international single 'PERDONO' has been also recorded in English, Spanish and French.

TIZIANO FERRO (that’s his real name) is 22 years old and hails from Latina (a city near Rome). His first steps were in a piano bar in his hometown, before joining a local gospel choir. While in the gospel choir he discovered he had a great passion for music. 'Without a doubt music is my greatest love' says Tiziano. After knocking on the door of several record companies in Rome and Milan, he finally got a recording contract with EMI Music Italy in May 2001.

When EMI released his debut single, 'PERDONO', in July 2001 things were off to a great start. It skyrocketed to Number One in the Italian sales and airplay charts and stayed on top for 5 weeks. It went on to become Italy’s third best-selling single of 2001.

The monumental pop breakthrough with this smash hit set the path for the release of his debut album 'ROSSO RELATIVO' in Italy in October 2001. Upon release, it was hailed by both critics and fans alike as one of the year’s best records. And they were not wrong. The album debuted at Number Eight in the album sales chart and by that time the album’s second single 'L’OLIMPIADE' was already a Top Five hit on radio.

'ROSSO RELATIVO' (Relative Red, in English) is a mix of R&B and contemporary pop. It’s a moving record. It brings out every kind of emotion in Tiziano. It is a record that you cannot play enough. The12 songs of the album were penned by Tiziano himself and they fully prove that Tiziano is far from being a one-hit wonder. The album has already spawned three Top Five hits, including the most recent single off the album 'IMBRANATO' which is currently at the Number Five in the radio chart in Italy and is most likely to top the chart in the coming weeks. 'IMBRANATO' is an intensive ballad. The song has been accompanied by an extraordinary video filmed in Lake Como (one hour north of Milan).

'ROSSO RELATIVO' has a broad appeal. The album will be released in most European countries including Spain, France, Germany, Austria, Holland, Belgium, UK, etc. So don’t be surprised if when travelling across Europe you hear his first international single 'PERDONO' in English or Spanish or even in French - Tiziano has recorded the song in these four (including Italian) languages.

TIZIANO FERRO is currently in the middle of his first Italian tour, which he is combining with his promotional activities in Italy as well as his international commitments. Furthermore, he will also re-record the whole album in Spanish. The schedule would trigger groans of exhaustian and self-pity from most artists but Tiziano does it with passion and energy, essential elements that, along with a fresh and outstanding album, should help spread all across of Europe the success Tiziano has enjoyed so far in Italy. 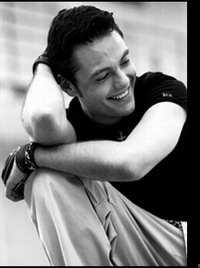