Without a doubt ,TIAMAT are one of Europe's most important and successful Gothic Metal bands. Their name is not only mentioned in one breath with bands like Type O Negative and Paradise Lost, but also decked out the programme of almost every festival of this genre: Grasspop, Dynamo, With Full Force or Wacken Open Air. TIAMAT toured the USA with Black Sabbath and Motörhead and guaranteed packed venues during their headlining-tours throughout Europe.

With Judas Christ they're proving that the band (centred around vocalist/guitarist Johan Edlund) are perpetually innovative and forward-thinking. On Judas Christ, the Scandinavians reveal their true strengths yet another time, allowing muted keyboards to blend perfectly next to harsh guitars, tying together melancholic distance with rhythmic advances, magnificently staging Edlund's ice-cool voice.

Judas Christ does not only offer the typical TIAMAT-compositions in the vein of "The Return Of The Son Of Nothing" and "So Much For Suicide", but also continuing experimental structures like the deeply atmospheric "Fireflower". On top of it, songs like "Angel Holograms" or "Love Is As Good As Soma" with their driving pace can easily be placed in similar stylistic regions like Sisters Of Mercy. For the first time in their history TIAMAT address limitless positive, life- and love-affirming topics: "Vote For Love" is probably the straightest and - in a positive sense - most commercial song the Scandinavians have ever composed. For a very good reason: "I'm no more young and inexperienced enough not to be touched by what happens in the world right now", explains Edlund. "It definitely made me think about my past and which memory people should keep in mind about me in case I suddenly die. I do not want to be the type of guy who is just spreading a sad and gloomy mood." The matter of finding an ideal sound was crucial to the new material, and thus was entrusted into only the most competent of hands: The new songs were produced by producer/engineer Lars Nissen in Copenhagen's Puk Recording Studio. One quick look into the ancestral halls of Puk Studio shows the caliber of their clientele: Elton John and George Michael recorded there, but above all two of TIAMAT's personal favourites: Sisters Of Mercy worked at Puk Studio on their landmark album Vision Thing, as well as Depeche Mode's Music For The Masses. Nissen is part of the elite circle of freelance-producers who are regularly present in that studio and has an excellent reputation far across the borders of Denmark. Nissen and Edlund have been in touch for the first time last year when the TIAMAT-boss did his solo project Lucyfire, with Nissen handling the final mix of their debut album.

To answer the inevitable question about the album title Judas Christ: Is it a pseudo-philosophical term? Actually, no. "Of course the title is meant to be an eye-catcher", Edlund confesses. "Judas Christ is rather a statement against the hypocrisy of the Christian church. If Jesus would be alive he would still see Judas as his brother, yet this title provokes today's Christians. For me it's like fighting them with their own weapons." During their history TIAMAT experienced a successive metamorphosis from feral black metal to a sound-cosmos embracing more open influences. In the beginning of the Nineties their debut-album Sumerian Cry nonetheless received favorable critical responses, but their second album The Astral Sleep already showed a good amount of development. By their third release, Clouds, the band had already unveiled early signs of what was to come. Their commercial success was almost inevitable: With 1994's Wildhoney, TIAMAT presented a true masterpiece which developed into their record label's best-selling album. The press was raving about their magnificent sonic trips in the style of Pink Floyd and attested that the band has recorded an epic classic which you could classify as "atmospheric space-romance" (quote). Two and a half years later the follow-up A Deeper Kind Of Slumber revealed a less rigid and inspired TIAMAT in a more brooding state of mind, playing numerous headlining shows in the following year. With his move to Dortmund, Germany, Edlund finally found an escape from his inner darkness. While the previous albums often dealt with a paranoid state of feelings their 1999 album Skeleton Skeletron worried more about concrete topics and the communicative exchange between people. Edlund: "Wildhoney and A Deeper Kind Of Slumber were way more dreamy whereas Skeleton Skeletron is telling the truth behind all those stories." With Judas Christ they have taken another confident step further, dealing with more universal topics wrapped in an accessible corset of sound. The times of pure bitterness are over, TIAMAT in the year 2002 are dedicated to exploring the intricacies of interpersonal life and making positive comments along the way. 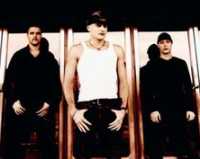