Thomas Dybdahl (born 12 April 1979 in Sandnes, Norway) is a Norwegian musician in the singer/songwriter tradition.

Thomas Dybdahl went out to become somewhat of a shooting-star in Norway. As a solo artist, the former guitarist of the band Quadraphonics released his first single EP Bird in 2000. His first release did not have much success, and his second EP from 2001, John Wayne, was also unsuccessful.

Beginning with the release of his first album titled ... That Great October Sound in 2002, the first part of his gold and platinum selling October series, he received national and even international appreciation for his unique work. Since then, and especially after the European release in 2004, Thomas Dybdahl's notability has increased significantly. The mostly positive reviews tout Dybdahl as a new pop wonder comparable to Nick Cave, Jeff Buckley and other important solo artists. He received the Spellemannprisen and the Alarm Award for his outstanding work.

The release of his next two albums Stray Dogs (European release in 2005) and One Day You'll Dance for Me, New York City further increased his standing as a respected artist.

The album One Day You'll Dance for Me, New York City features the famous Norwegian philosopher Arne Næss speaking of quality of life, as a sort of interlude.

In 2004, he teamed up with artists from the bands Jaga Jazzist and BigBang on the project The National Bank, which immediately entered the Norwegian charts with the project's self-titled debut album. It was released outside Norway in 2009.

His single Damn Heart, written for the Danish movie En Soap, was released in 2006 on Copenhagen Records.

In 2007, he performed as an opening act in the USA for fellow Norwegian artist Sondre Lerche and is expected to be opening for Tori Amos on her 2011 Night of Hunters Tour.

He features as the vocalist on several songs from Morcheeba's album Dive Deep. 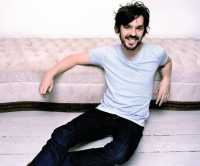