The diverse sounds found on The Richest Man In Babylon should come as no surprise to anyone familiar with Thievery Corporation, for both Rob Garza and Eric Hilton have very diverse musical backgrounds. "Electronic music is very often cold and mechanical; this is not attractive to us in the least. Our influences come from organic productions and I think this is especially evident on the new album," says Garza. This is perhaps why people have had a great deal of difficulty in placing Thievery Corporation into any preconceived musical genre. "I think that ours is a sound which takes from so many forms of music that it's fairly hard to pin down. It is made electronically, but I don't think it sounds that way," explains Hilton.

While neither considers himself a musician by definition, both members of the duo have musical backgrounds. Hilton was playing in a neighborhood garage rock band at the age of 11. "I think we sounded a bit like the Ramones meet Deep Purple; we were very bad, but the kids who lived around us always asked us to play.” Later, in his teens. Hilton became in awe of early punk rock groups like The Clash, The Jam, and The Sex Pistols. But it was the discovery of the local DC hardcore sound that he thinks changed him forever. "I was so impressed by groups like The Teen Idles, SOA and Minor Threat. Not only did I love the sound, but I couldn't get over the fact that these groups were from my neighborhood. That was when I realized the power of doing-it-yourself."

After forming his own hardcore band in high school, Hilton’s tastes broadened his interests to include those of the two-tone and neo-mod sounds that were emerging in the UK. "I literally discovered my love of soul, jazz, bossa nova and Jamaican music through the revival groups of the new wave era. Groups like the Specials, Madness, Secret Affair, The Style Council, and others inspired me to go back to the roots of their music."

In the late eighties, Hilton became a house music deejay at the Fifth Column, D.C.'s premier dance club at the time. "Rob's group actually played there once, but I was off that night," jokes Hilton. "I don't know why I was digging house and hip-hop at that time; it seemed fresh, but not for long." Leaving his gig there, Hilton and friend Farid Ali (co-owner of the Eighteenth Street Lounge and ESL Music recording artist) began to throw warehouse parties and they started a weekly club night called Exodus. "That was a fantastic party and I dare say that it is a legend in DC. Our resident deejay was Dubfire (now half of Deep Dish), and our Jamaican friend Hutchy (heard on some Thievery cuts) was the MC. We played a deep mix of hip-hop, early acid jazz, dance hall, and dub. People still lament the closing of Exodus," says Hilton.

Rob Garza was born outside Chicago and soon moved to Walkersville, Maryland, a small town, forty miles from Washington, DC. He grew up listening to his parents’ record collection - Henry Mancini, Sam Cooke, Johnny Cash, The Drifters, and the Beatles. "Those artists inspired me a lot, I really appreciated their ability to convey emotion through music," says Garza.

At age 16, Garza moved to urban Connecticut and started making beats and electronic music in his school's electronic music class. There he learned electronic sequencing, sampling, and drum machine programming. "I created a basement studio and was into exploring electronic musical textures." After returning to Maryland for high school, Garza enrolled at a school for visual and performing arts. "It was very interesting because at the time I was really into the punk-hardcore scene and started to learn about classical and jazz music," says Garza.

”I became increasingly passionate about music when I heard bands like the Pixies, Renegade Soundwave, Hugo Largo, Meat Beat Manifesto, and My Life with the Thrill Kill Kult. The Pixies were probably one of my most influential bands on me…they sung in Spanish, their phrasing was so unique, and their lyrics talked about whores, insanity and mutilation - how could anyone not like the Pixies? And Hugo Largo really reintroduced me to the use of space and the organic feel of sound," explains Garza.

While working for a firm specializing in aviation security and counter terrorism ("stake outs, de-bugging - the usual spy thing"), "In 1993, I discovered jazz and bossa nova. I had been aware of these sounds peripherally and finally just started to dive headlong into these sounds". "In 1995 when Eric and I met and started working together, I just got deeper and deeper into the subtler side of music," explains Garza.

In 1996, Thievery Corporation was first recognized for their now classic electronic LP, Sounds From the Thievery Hi-Fi. This record first hinted at their ability to merge seemingly divergent musical styles and create an entirely new genre. This LP led to a string of high profile remixes for David Byrne, Pizzicato Five, Stereolab, Baaba Maal and many other diverse artists. These remixes appeared in collected form in 1998’s Abductions and Reconstructions (ESL017). Subsequently, Thievery contributed one of the finest DJ Kicks albums in the !K7 Records series.

Two years later, Thievery Corporation released The Mirror Conspiracy in August 2000. This record represented a significant step forward in both the scope and style of Thievery Corporation’s sound. Not only was the record critically acclaimed, but it managed to sell over 350,000 copies world wide without the support of commercial radio, American MTV, or major label backing.

Earlier this year, Hilton and Garza were tapped by Verve to select their favorite songs from this seminal jazz label’s vaults. Ironically titled, Sounds from the Verve Hi-Fi, this compilation introduced many new listeners to the obscure classics that have been Thievery favorites for years. Thievery were extended the honor of remixing the timeless Astrud Gilberto track, Who Needs Forever, which appears on the Verve Remixed album.

On their latest release, they collaborate with a wide range of artists, including Emiliana Torrini, Notch (from Born Jamericans), Lou Lou, Sleepy Wonder, Pam Bricker, and Shinehead. The following are Rob and Eric’s brief comments on the individual 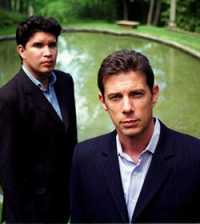