1991 - The Tea Party release their first album independently. The self-titled debut was mainly distributed throughout Ontario and all 3500 original pressings sold out within a year.

1992 - Ontario club circuit tour begins. During this time the band turned down several offers of recording contracts from major record labels in search of complete artistic control over their records. EMI Music Canada offered The Tea Party the assurance they were looking for and left the band's artistic fires and creativity up to them.

1993 - Splendor Solis is the first major label recording for The Tea Party. The music and sound of the record is described as having a "very earthy feel". Overseas territories such as Australia and Europe embrace the band and Jeff Martin, Stuart and Jeff Burrows embark on their 'very successful' first overseas tour. Splendor Solis is The Tea Party's first Gold release in Australia.

1994 - The Tea Party win 2 Much Music Video "People's Choice" awards for "The River". In March, the band are the first Canadian artist, the first EMI artist and among the world's first half dozen artists to perform a live Internet only concert.

1995 - The Edges Of Twilight (partly inspired by a book on The Celtic Spirit and Shamanism by Tom Cowan called Fire In The Head) is released and harmoniously blends North African, Middle Eastern and Indian exotics with heavy rock sounds and dark mystical lyrics. Over 31 different exotic and acoustic instruments were used as a template for the record.

The Tea Party complete an extensive U.S. tour, earn 3 Juno Nominations and win the Much Music Video Award for Favourite Music Video for "The Bazaar".

The 1996 EP, Alhambra (taking its name from the Moorish Islamic palace in Grenada) is used as a bridge between The Edges Of Twilight and the band's next release. It featured 4 beautifully intricate re-worked acoustic songs from The Edges Of Twilight and two others, the first a song entitled, "Time" with Roy Harper on vocals and the second a remix of "Sister Awake." The EP also featured a multimedia CD-ROM component that the band used as a way to explain themselves, inviting fans to explore the details of exotic instruments, song meanings and video/audio clips.

1996 - A brief touring stint around Canada known as 'Alhambra Acoustic and Eclectic' follows the EP's release, enabling the band to sit down with these exotic rarities and play in an intimate setting, sharing the stories behind some of the songs and instruments with fans.

1997 - The Tea Party's exciting evolution from blues-rock to eastern-rock to its current hybrid is sealed with the release of Transmission.

1998 - Jeff Martin hosts and performs at the first ever White Ribbon Campaign (the largest effort in the world of men working to end violence against women). In March, The Tea Party release a limited edition four-track sampler featuring their Top 5 single, "Release", donating all profits to the White Ribbon Campaign.

1999 - Triptych is released and is yet another evolution in the band's music. A 'set of three artistic works hinged or tied together' is one meaning behind the albums title. The first single from Triptych, "Heaven Coming Down" goes to #1 at radio - a first for the band.

The success of Triptych is followed by an extensive tour selling out theatres across Canada and the band return to Australia and Europe again.

In 2000, The Tea Party celebrate 10 years of musical exploration with the release of Tangents - The Tea Party Collection. A fifteen-song collection of new, hit, rare and re-mixed tracks. The band is the first Canadian recording artist to offer a secured commercial digital download of their songs.

2001 - The Tea Party are the first Canadian artist to offer 5.1 mixes of all of their videos along with other exciting elements on their debut DVD, "Illuminations".

After four full-length albums, one EP, a best of selling collection and a platinum selling DVD, The Tea Party go back to the beginning with The Interzone Mantras. The album is recorded in 20 days at Le Studio in Morin Heights, Quebec.

The Interzone Mantras is The Tea Party's highest debut ever in Australia (#6 on the ARIA National Album Charts).

2002 - The Tea Party embark on a 7 city Canadian tour opening for Ozzy Osbourne and then head out on the road for a cross Canada headlining tour in April. The band receives 2 Juno Nominations for "Best Group" and "Best Recording Engineer" (Jeff Martin & Nick Blagona).

The band performs at the 'Big Day Out Festival' in Australia (Adelaide & Perth) with The Prodigy, New Order, Garbage, The White Stripes, etc...in front of 40, 000+ fans each night.

In the fall of 2002, The Tea Party joined the Du Maurier concerts collaborative concert experience by headlining eclectic and unique concerts in Vancouver, Calgary, Toronto, Montreal and Quebec City. The band adapt their live show to include members from the local symphony orchestras in each city and share the stage with cellist - Sheila Hannigan, Canadian born Kathak dancer - Joanna Das and operatic sensation - Christine Williams.

2003 - The Tea Party team up with the Discovery Channel for the 'Science of Rock And Roll Uncovered' (shot in November 2002 at Quebec City's Theatre Capitole during the Du Maurier tour.

On July 30, The Tea Party join the Rolling Stones at Toronto's SARSfest with an afternoon performance in front of 400, 000+ fans.

In September/October, 2003, the band head to Hawaii to work with Bob Rock and record 3 tracks for their new record.

2004 - The band team up with Juno Award winning producer, Gavin Brown to record Seven Circles, due in stores on August 17.

The Tea Party perform at The White Ribbon Concert, once again hosted by Jeff Martin and honouring the band's late manager, Steve Hoffman, with a stunning performance of "Oceans".

They are one of Canada's premiere bands, ready to prove that the journey they've shared with us since 1990 is far from over. 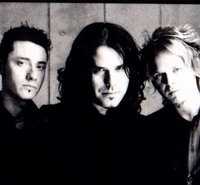