The Saturdays are a British-Irish pop girl group. The band consists of members: Frankie Sandford; Rochelle Wiseman; Vanessa White; Mollie King; and Una Healy. During the summer of 2007 the group formed under the record company Fascination Records and played as a supporting act on Girls Aloud's 2008 Tangled Up Tour. The girls released their debut single "If This Is Love" on 28 July 2008 which charted at #8 on the UK charts, and their second single "Up" was released on 12 October 2008, charting at #5. Their debut album "Chasing Lights" was released on October 27th 2008, receiving critical acclaim. The album has already been certified Gold.

The Saturdays are signed to Fascination Records, a division of Polydor Records. Their debut album Chasing Lights was recorded during May and June of 2008. To promote their debut single "If This Is Love" they supported Girls Aloud, also signed to Polydor, during their Tangled Up Tour in 2008. The Saturdays embarked on a wide range of promotions to promote their debut single. The single was released on July 28, 2008 and peaked at #8 on the UK Singles Chart.

Their second single "Up" involved the girls promoting the single on a number of popular TV shows. This included GMTV and ITV2's The Fashion Show. The single managed to reach #5, surpassing "If This Is Love" by 3 positions. "Up" was featured in American adverts for the show Ugly Betty. The release was followed two weeks later with their debut album "Chasing Lights" on October 27, 2008 to positive reviews from critics. The album peaked at #11 on the UK Albums Chart, selling over 22,000 in it's first week. It's sold in the region of 100,000. Therefore being certified Gold. [2]

The album's third single was confirmed to be "Issues" by the band during their set at Perez Hilton's "One Night In Liverpool" gig on November 5. 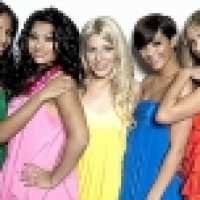