Evolution of a Rock Band

From their humble Oklahoma City beginning eight years ago to their more recent tour of America to support their hit single "Sister," The Nixons have spent most of their time on the road. Consequently, their time touring has been the only opportunity they have had to write new material. With their new album Latest Thing, the guys, Zac Maloy (vocals/guitar), Ray Luzier (drums), Scott Bush (lead guitar), and Ricky Wolking (bass), parked the bus in the garage.

"This album is different because we actually took a year off from touring to focus on writing," says Zac. "Typically it was like we would write 12 songs while on the road, put out the next CD, and get on a bus to tour again." The new, evolved approach has paid off. During the touring hiatus, the band wrote almost 70 new songs. From those songs, they picked the best 13 that reflect where the band is now emotionally: ready to rock out.

"Looking at our history, I know it is a clich?to say, but, this is our best collection of work," says Zac. "I think a lot of it has to do with everything that went into this album. It seems we all evolved with the help of our producer Stephen Haigler (Fuel, Jimmie's Chicken Shack, Oleander), this record captures the best part of the band."

"They were the best. Everything seemed to just flow," says Haigler. "It was like we all instantly became family. Here you are in the studio with these guys 10 to 12 hours a day and you still want to hang out with them after recording and have a beer or seven. It was just a great experience."

The songs Haigler produced for Latest Thing are fresh and new, yet they still retain that classic Nixons feel reminiscent of their near-gold album Foma. A couple of songs, "First Trip" and "Latest Thing," offer been-there reflections about the delicacies of love. While "The One" is a pret-a-mosher (ready-to-mosh) rocker, songs like "Drama Queen," "Blackout," and "Nobody 101" bring out the pure rocking satisfaction in just being alive.

"The Nixons have evolved to be 'The Complete Package,'" says A & R Director Jim Cardillo. "The Nixons have everything you could want in a band: great songs, great musicians and great fans." Part of The Nixons' charm and cause for their fanatical following stems from their sweaty and emotionally explosive live shows. They know the crowd is not there to hear them replay their last record. They relive the raw emotions spent writing the song and interpret that for the audience. The live show is like an emotional roller coaster with peaks and valleys that leave the rider spent and wanting more.

"Each time I see their show, I get more enthralled," says Cardillo. "This band gives you what is on the CD and much, much more." So that they could continue to interact with their fans while writing and recording, The Nixons developed www.nixons.com. In addition to tour dates, bio information and merchandise, the website features personal postings from the band regarding fans questions and comments.

"The website is a way for our fans to log on and find out what is going on in our little rock world, says Zac. "These three guys from New Jersey have seen us all over the states, from New England to the Southeast and Texas. They use the website to find out where we are going to be. That is pretty cool."

Of course the future for The Nixons will take them down some of the same roads and interstates of their past. "Next, we have to get back on the road and tour. We have to take our music to the people and reach out and touch their lives and have some fun, " says Zac. "This really is the best job in the world." 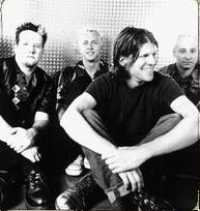