The Feeling are five twentysomethings from Sussex and London who love pop music. Great big no-nonsense, hook-filled, giant-chorused pop music – music for the masses, only intelligent, with sunshine hooks and killer choruses that everyone can hum, from plumbers to professors.

Singer Dan Gillespie Sells, who admits to having had an indie phase once, says: "There are no guilty pleasures anymore. You're allowed to like Andrew Gold, ELO, Supertramp or 10cc. It's really liberating."

The Feeling are pop and proud. They're reclaiming the term.

Like The Raspberries or, more recently, Jellyfish or The New Radicals, The Feeling are premier exponents of prog pop meets nouveau soft-rock.

If there's a Lennon & McCartney - or rather, Becker-Fagen, Gouldman-Stewart, or Godley & Crème - in The Feeling, it's the hydra-headed Dan Gillespie Sells, who handles the music and the words. The band, they say, have to "wrestle the songs out of him."

This perfect blend of pop and prog will soon see the light of day on The Feeling's debut album "Twelve Stops And Home". It will be a 12-track affair "with no fillers, all stonkers - a classic album."

It will also, explains Richard, be "lush and epic," while at the same time being, in Dan's words, "stripped-down." The singer cites early Elton John records, The Beatles' swansong and The Carpenters as examples of the feel The Feeling are after.

"They were epic but not lavishly orchestrated," says Dan. "'Rocket Man' is just bass, guitar, piano and drums, but it's vocally driven with not much else going on. ‘Let It Be’ was still powerful without the orchestration. It still had epic-ness; a melodic strength to it. Or 'Solitaire' by The Carpenters: that's a great example of a song that's epic but stripped down. The Carpenters were a big influence on me."

GET THE FEELING 3: THE HISTORY
The Feeling, who are all between 25 and 27, are overnight sensations with a bit of a past, cutting their teeth as session musicians on a variety of mainstream and marginal recordings. They're all from Sussex, except Dan, who's from London. Paul, Kevin and Ciaran even went to the same school: Paul and Ciaran were in the same year. The Sussex axis of the band have been friends for 13 years. They met Dan and Richard at music college in Croydon 10 years ago, and they've been working together in various forms ever since.

Five years ago they went through their "Hamburg era" when they appeared for several seasons in the Alps as a covers band who specialised in versions of Rolling Stones, Kinks, Stevie Wonder and Beatles songs as well as rocked-up versions of '80s hits like "Take On Me" by A-ha, "Walk Like An Egyptian" by The Bangles and "Jump" by Van Halen: "Whatever got the crowd going."

The band still go back there, to try out new material.

"It's our spiritual home," says Richard, adding more seriously: "That's how
we got good at playing."

GET THE FEELING 4: THE PLAYERS
The Feeling are, let's not be coy, superb musicians who have spent years honing their craft. That's not to imply that virtuoso expertise and dexterous professionalism in rock'n'roll are a necessity. But it certainly helps if you can play your instruments. And these cats can play.

But who inspired them, as individuals?

Paul?
"Loads of people! Mick Fleetwood, Bernard Purdie, Roger Taylor and Ringo are all big influences. There seems to be a misconception that Ringo was crap, but some of his parts were genius," says the drummer. "I’d love to contribute as much to our sound as he did to The Beatles."

Dan?
"Karen Carpenter was one of the greatest vocal technicians ever. She had a clean, pure voice, only filled with oodles of emotion. It was heartbreaking. But it doesn't have to be flourish-y or over-elaborate. I'd choose Freddie Mercury for his stage presence, and Neil
Young for his guitar-playing. I'd like to be Karen Carpenter in Neil Young's body. With Freddie Mercury's trousers."

Richard?
"I like to get involved with the whole arrangement and see how I can complement it with my part. Bassists like Paul McCartney or John Deacon were great in this way. For technicality, I'd pick Jaco Pastorius [jazz-rock fusion supremo] or James Jamerson [Motown] "

Kevin?
"Slash and Brian May - Slash for the sheer attitude of his playing, and Brian May for the fact that his solos are always an indispensable part of every Queen song."

Ciaran?
"Maybe Joe Zawinul," says the quiet but deadly keyboardist, and you've got
to admire a band that reference groups like Earth Wind & Fire and Weather
Report. "But my favourites would be Garth Hudson of The Band and Tom Waits."

GET THE FEELING 5: THE FUTURE
The Feeling have an assured future. With dead-cert smash hits like "Fill My
Little World", the joyous harmonies of "I Want You Now", the lilting acoustic and electric guitars and micro-melodies of "Never Be Lonely", the surging keyboard refrains and pop riffs of "Love It When You Call", touching piano ballads like "Strange" and "Spare Me", and the awesomely infectious "Helicopter", pretty soon you won't be able to - hey! - fight The Feeling. They'll just be there, on our radios, a part of all our lives. 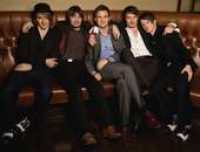