As Roger McGuinn once said of the Byrds, "It was Dylan meets the Beatles." The Byrds combined the upbeat, melodic pop of the Beatles with the message-oriented lyrics of Bob Dylan into a wholly original amalgam that would be branded folk-rock. If only for their harmony-rich versions of Dylan's "Mr. Tambourine Man" and Pete Seeger's "Turn! Turn! Turn!," drenched in the 12-string jangle of McGuinn's Rickenbacker guitar, the Byrds would have earned their place in the Rock and Roll Hall of Fame. Yet the group continually broke ground during the Sixties, creating revelatory syntheses of sound that were given such hyphenated names as space-rock ("5D [Fifth Dimension]"), psychedelic-rock ("Eight Miles High") and country-rock (their Sweethearts of the Rodeo album). At a time when rock and roll was exploding in all fronts, the Byrds led the way with an insatiable curiosity about the forms and directions pop music could take. In so doing, they became peers and equals of their mentors, Dylan and the Beatles.

McGuinn had been a folk-music accompanist for such acts as the Limelighters, the Chad Mitchell Trio and Judy Collins, among others. Singer/guitarists David Crosby and Gene Clark were West Coast folkies, while bassist Chris Hillman and drummer Michael Clarke arrived with bluegrass and rock backgrounds, respectively. Formed in Los Angeles in 1964 (and briefly known as the Jet Set and the Beefeaters), the Byrds built their sound upon the three-part harmonies of McGuinn, Clark and Crosby. Vocal harmonies were a feature of the L.A. pop scene, which also boasted the Beach Boys, Jan and Dean, the Mamas and the Papas, and the Turtles. The Byrds were unique among them in their chameleonic capacity for reinvention with each new single and album. There was a dizzying creativity in evidence, particularly during the peak years of 1965-1967, when the Byrds broke the Top Forty seven times while extending rock into new underground areas.

The group's finest moment was "Eight Miles High," a song about the group's flight to England for a tour -- though it also tapped into the mysterious ether into which the larger counterculture had been piloting itself, politically and philosophically no less than pharmocologically. McGuinn's 12-string solo bore elements of both John Coltrane's modal jazz innovations and the drone of an Indian raga. This sense of tantalizing mystery and playful subterfuge informed the Byrds' best work, from their groundbreaking recasting of Dylan's "Mr. Tambourine Man" to their classic sendup of the celebrity life, "So You Want to Be a Rock 憂' Roll Star." Dylan remained a touchstone; recording more than a dozen of his songs at various stages of their career, the Byrds stand as his ablest interpreters.

By the time the Byrds recorded the landmark Sweetheart of the Rodeo album in 1968, original members Clark and Crosby had dropped out and country-rock pioneer Gram Parsons had come aboard for a brief but influential stay. McGuinn was the only original member of the four-man lineup that lasted from 1969-72, which included guitarist Clarence White, bassist Skip Battin and drummer Gene Parsons. This version of the Byrds recorded several albums, including the double album Untitled, and evolved into a tightly knit performing group, outstripping the original lineup on that count. (Sadly, guitarist White was killed when he stepped in front of a truck in 1973.) The five original Byrds convened for an ill-fated reunion album in 1973, but by this time the group members were all doing well on their own: McGuinn and Clark as solo artists; Crosby as part of the harmony-based supergroup Crosby, Stills and Nash; Hillman, as a solo artist and member of Souther, Hillman and Furay; and Clarke as drummer for Firefall.

Hillman subsequently found success in the country-music field with the Desert Rose Band, while Crosby successfully fought substance abuse and related health problems in the late Eighties. Gene Clark and Michael Clarke succumbed to health problems in 1991 and 1993, respectively. McGuinn, Hillman and Crosby reunited to perform as the Byrds in 1989, in order to legally reclaim the name, and recorded four songs for The Byrds box set, released in 1990. 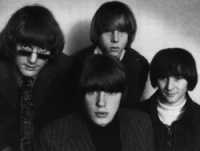