The Adverts were formed in mid-1976 shortly after the first Sex Pistols show by two Devon art students: TV (Tim) Smith on vocals and the distinctive, panda-eyed Gaye Advert (née Gaye Atlas) on bass. The remaining members of the band included guitarist Howard Pickup and drummer Lorry Driver. One of the first bands to become a familiar fixture at London's Roxy Club in Convent Garden, The Adverts' raw, enthusiastic sound quickly came to the attention of the Damned's guitarist Brian James, who offered the group an opening spot on the Damned's upcoming tour and directed them toward Stiff Records.

The Adverts made their vinyl debut performing Bored Teenagers on Harvest's live compilation album, recorded at the Roxy. By the time that this compilation had been released, the Adverts had also completed their first tour alongside the Damned. It was through this connection that they cut their debut single for Stiff Records, One-Chord Wonders, which was released on April 22, 1977. The Adverts were the second band to sign with Stiff, following hot on the heels of the Damned; their first recording is retrospectively regarded as being one of the greatest early UK punk singles. This Stiff 45, along with Gaye's visual appeal, prompted the much larger Anchor Records to sign the Adverts in July 1977 - and it was the band's next single, Gary Gilmore's Eyes, that proved to be the most successful - their only Top 20 hit. The Gary Gilmore reference was to an American convict who had been recently executed; the Adverts made up some gruesomely funny lyrics about how Gary's eyes get transplanted into some unfortunate chap and then this poor guy wakes up seeing the world through the eyes of a killer. The tune was driven by a catchy, commercial chorus, and the song peaked at number 18; it was one of the earliest punk singles to find significant commercial sales.

Before the years' end, the Adverts had managed to squeeze out another single: Safety in Numbers. Then, Anchor went into bankruptcy and the band moved on to Bright Records, which was run by ex-Anchor manager Dave Hill. In February 1978, the Adverts finally unleashed their long-awaited first LP: Crossing the Red Sea with the Adverts. With the initial 250 pressings released on shocking red vinyl, it has been referred to as the Great Lost Britpunk Album, despite the fact that originally it did not contain their biggest hit Gary Gilmore's Eyes (an omission that would be corrected in later re-releases). At around the same time, drummer Lorry Driver was replaced in fairly quick succession by John Towe (formerly of Generation X and Alternative TV) and then by Rod Latter - an unfortunate foreshadowing of things yet to come. Following the release of their next single, No Time to be 21, the group's luck took a decided turn for the worse in earnest: their second album Cast of Thousands plummeted into instant oblivion despite a recent move to the mainstream RCA Records. To add to the spiralling malaise, in late 1979 Gaye and Howard decided it was high time to pack it in. TV Smith half-heartedly led a brand new line-up through some final gigs and then disbanded the group permanently, re-emerging during the early 1980's as the head of T.V. Smith's Explorers.

Posthumous releases: The Adverts' Peel Sessions EP, originally recorded in 1977, was released in 1987. The compilation LP Live at the Roxy Club was released in 1990, followed by the CD compilations The Punk Singles Collection (1997) and The Best of The Adverts (1998). Also, both of their albums have been re-released several times, on vinyl and more recently on CD; and the all new version of Crossing the Red Sea now rightfully includes Gary Gilmore's Eyes - and all's right in this world. 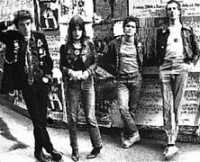