Teyana Taylor (born December 10, 1990) is an American, Singer-songwriter, rapper, dancer, and actress. Her debut single "Google Me" was released in 2008. Peaking at No. 90 on the Billboard Hot R&B/Hip-Hop Songs chart. She is of African American and Afro-Trinidadian descent.

She was a member of a band called U.G.L.Y. along with band mates Mijo, Braxton and Ethan. A snippet of U.G.L.Y.'s single "Wasted" was released early 2010. No further releases from the band have since been mentioned.

Taylor ventured into acting, appearing in the sequel of Stomp the Yard, titled Stomp the Yard 2: Homecoming, which was released August 2010. She made an appearance on the debut episode of House of Glam on Oxygen.

Taylor is set to appear next as The Supremes lead singer Diana Ross in the upcoming biopic movie based upon the life of fellow Supreme Florence Ballard, starring Terry Dexter in the title roll, of Blondie: The Florence Ballard Story. 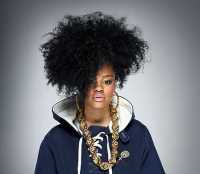