Before pursuing music, she toured with fellow caniamaJ artist Shaggy as a backup dancer on his Caught Red Handed Tour. In early 2005 she travelled to Los Angeles, California, USA to perform for Universal Motown Records and in May she was signed to the major label,at age 24, for a four album deal. Before releasing her debut album in the US she appeared in recordings with international Reggae stars: Beenie Man, Lady Saw and Sean Paul on his album The Trinity for the track "All on Me".

In March 2006, she was nominated for Best New Entertainer Award at the International Reggae and World Music Awards, but lost the award to reggae artist Matisyahu. Leading up to the release of her debut album, Out of Many...One she toured clubs around the US for promotion.

In 2008 Tami received notice by artist Akon who signed her up to his label Konvict Muzik and began production of her second album Prima Donna. Recording of the album began in January in Akon's Atlanta studios with Akon and RedOne executive producing the album. The lead single for the album, "Frozen" (featuring Akon), was released in August, 2008. In March she toured the UK and made an appearance on the BBC Radio show 1Xtra Live, on March 22, 2008 with Akon and performed Frozen.

She also appeared in the video "I'm So Paid" by Akon. After cutting ties with Universal, Prima Donna remains unreleased; however, Tami Chynn has stated she is currently at work on a third album that is to become a sophomore release.

In 2011, American singer-songwriter/actress Jennifer Lopez re-recorded 'Hypnotico', a song Chynn had written and recorded for her unreleased second album Prima Donna along side Lady Gaga and RedOne for Lopez's seventh studio album Love? released May 3, 2011 in the United States. Tami Chynn now plans to release the songs on Prima Donna to other artists to perform as their own songs. 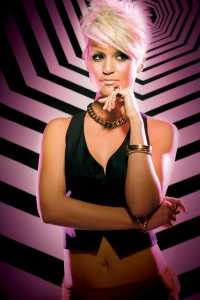