Take 5 are 5 young American boys who launched their career in Orlando.And,their ages range from 19 - 23.
There are 2 brothers in the group -- Ryan and Clay.They had been good friends with TJ since they met each other at the Minneapolis Boys Choir in Minnestoa.

Later on,TJ and Clay relocated down to Orlando from their hometown,Minnersota to do some auditions.While waiting for their turn at an audition,TJ and clay met Tilky and Stevie and immediately hit it off.The group needed a bass so Clay called his brother Ryan in England where he was studying Psycology at Oxford University.Ryan, TJ, and Clay then rellocated to Orlando from thier hometown,Minnesota .The band,Take 5,was formed in November,1997.

From TJ's falsetto to Ryan's bass voice combine with the diverse tenors of Clay,Stevie and Tilky,Take 5 takes vocal harmony to a new level. 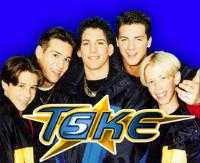