SYSTEM OF A DOWN

Not long ago, accepted sonic belief held that rock music, certainly hard rock music, had been stretched, manipulated and tinkered with to its logical end. With no new forms looming, the genre would slip into malaise and the kids would look elsewhere for an outlet. Enter Los Angeles quartet System of a Down, who, over seven years and two albums have revived and revitalized heavy music with their manic brand of post-everything hardcore. Millions of records on, they charge into the new century as living proof that for those brave enough to snub convention, greatness follows.

“I think we're ahead of the game,” says guitarist/songwriter Daron Malakian. “I just feel like this band will be more respected ten years from now when people finally figure out what we’re really doing.”

Malakian says,“We started this band to show people, ‘Look, not everything has been done before.’”

Tankian says, “Humans have been on the earth for millions of years, yet we don’t believe man began thinking until he started building walls. And what good have these walls ever done us?”

System’s 1998 self-titled debut, produced by bearded board whiz Rick Rubin (Slayer, Red Hot Chili Peppers, Public Enemy), was an achievement in pastiche overdrive, a dark carnival of moods punctuated by breakneck tempo shifts and progressive structures. That year, radios rung to the visceral fury of “Sugar” and the spooky tension of “Spiders,” each a fiery baptism for listeners weaned on predictability and rote rhyme schemes.

Serj favors abstract, existential poetry, peppered with politics and personal religion. He says, “No one ultimately knows what they’re saying anyway. Are we really making art? Art doesn’t belong to us. It doesn’t belong to people, it belongs to the universe. It comes FROM the universe. It comes THROUGH us. When I write something, I think I know what I’m saying, but I never pretend to know the full meaning of the words.”

The singer’s quaking wails were the perfect compliment to Daron’s schizoid noodling, Shavo’s inventive lines and John’s potent jazz-cum-thrash rumble. Their first salvo found an instant cult and was heralded as a revolutionary diamond in the homogenous crush of Nü Metal…a label that clearly didn’t (and still doesn’t) fit this foursome.

John says, “I don’t think we sound like anybody else. I consider us System of a Down.”

Shavo says, “You can compare us to whoever you want. I don’t care. Comparisons and labels have no effect on this band. Fact is fact: We are who we are and they are who they are.”

Two years of hard touring followed (OzzFest et al) before the band re-immersed themselves in the studio in late 2000. With Rubin again at the helm, they set about crafting a sprawling blitzkrieg of sounds, one that invited an even wider array of influence and experimentation to the table. Melodies expanded. Riffage went mad. Structure and timing were eviscerated. Deeper lyrical levels were mined and the resulting gems were strewn onto thrashing anthems and careening frenzies of fuzz.

Rubin says, “They really set out to reinvent themselves, to be bigger and better than they were last time. I think they're very proud of their first album and all the touring they did. They wanted to grow from those experiences and expand. They really wanted to write lots and lots of songs and reach in all different directions.”

In August of 2001, System of a Down emerged with their second album, “Toxicity.” As critics scoured their thesauri for ample superlatives, radio and MTV heavily rotated the first single, a harmony-drenched slab of whiplash rock called “Chop Suey.” With the cult of System exploding nationwide, the foursome took to the road where manic throngs of Systemites old and new awaited.

In May of 2002, with the title track from Toxicity in heavy rotation and a third single, “Aerials” fast gaining steam, System accepted the coveted headlining slot on the annual OzzFest circus. The thinking man’s metal troupe aim to give Ozzy’s mobile headbangathon an intellectual facelift.

Shavo says, “It’s time for the bands these kids are listening to to deliver something deeper than just ‘let’s party.’”

Now one year after the triumph of “Toxicity,” System of a Down find themselves in an elite class of rock acts who’ve managed commercial hugeness with dignity in spades and nary a compromise on their resume. They’ve engendered a sound transcendent of trends or labels, a propulsive hybrid destined to flourish in any radio climate from here to forever. What sonic twists await us only they know, but we can rest assured knowing that their next offering, like those that have proceeded, will be born from a primal need to evade classification and emote loudly.

Daron says, “Everyone who knows me knows my music comes before anything. It comes before me. If someone said, "your music will live forever but you won't wake up tomorrow morning, I'd be like, 'Okay.' That's very fair to me.” 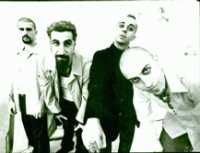