1969
Dafydd Ieuan was born on the 1st March 1969 in Bangor and plays the drums. He is Cian's big brother and they grew up on the Isle of Anglesey. He played with Gruff in their old band, Ffa Coffi Pawb (one of the most influential Welsh bands of the late 80s).

1970
Gruff Rhys (pronounced "Griff") was born on the 18th July 1970 in Haverfordwest and grew up in Bethesda; he is the lead singer of the band. Gruff admits to writing songs from a very early age (when he wrote songs about "driving trucks"). He played in the bands Emily, Ffa Coffi Pawb and Ahnfern before forming SFA and in 2005 he released his solo effort Yr Atal Genhedlaeth.

1972
Guto Pryce was born on the 4th of September 1972 in Cardiff, and is the Furries' bass player. He was in the underground band Anhrefn with Gruff and Dafydd before SFA was formed.

1976
Cian Ciaran was born in Bangor on the 16th June 1976, the brother of Dafydd. He does keyboards, electronics and some vocals.

1993 SFA formed in Cardiff after being in various other Welsh bands and techno outfits in the area (Dafyyd, Gruff and Guto had been together since the early 90s and had toured the north coast of France as a techno group). They then got to work on writing some songs, and in 1995 ended up signing to Ankst, the famous Welsh Indie label.

The name of the band came from t-shirts being printed by Gruff's sister. She was making 'Super Furry Animals' t-shirts for Acid Casuals (variants of which have appeared throughout SFA's career - cf. The Placid Casual, Placid Casuals Records, etc.)

1994 On Ankst, SFA released their first record, the Llanfairpwllgwyngllgogerychwyrndrobwllynyngofod (In Space) EP, to general critical acclaim. Soon followed the Moog Droog EP, named after the famous synth manufacturer (whose synths doubtless appeared more than once on the EP) and the slang term for a friend in A Clockwork Orange.

1995
After gigging in London in late 1995, they were noticed by Creation Records boss Alan McGee at the Camden Monarch (their second gig outside Wales), who signed them to his label, also home to the likes of Oasis and Primal Scream.

1996 In early 1996, the band's debut on Creation, Hometown Unicorn, becomes NME Single Of The Week and the first SFA single to chart in the top 50. The second release on Creation, God! Show Me Magic, climbed higher than the first and also became NME single of the week. It's one of the shortest singles ever at only 1 min 50 secs.

In May, their debut album Fuzzy Logic was released, again to wide critical acclaim. Unfortunately, it was more or less ignored by the general public; SFA's cult status at this time made the album peak at 23.

SFA gained their first top 20 hit with Something For The Weekend, which charted at number 18. The band then went on to release the limited-edition, and now very rare, The Man Don't Give A Fuck, which sampled Steely Dan. All the profits from the single went to Steely Dan for use of the sample. The song contained the word "fuck" over 50 times, which, of course, introduced the band to many more people.

1997
In early 1997, SFA embarked on the NME Brats Tour, famous for promoting new bands. In July, International Language Of Screaming was put out as a single before the release of the second album, Radiator in August.

Although it recieved widespread critical support, Radiator reached a peak of 8 then slid down the charts. Play It Cool was then released, again to critical acclaim, but didn't do particularly well in the charts (you might notice a pattern emerging...)

Even so, SFA were established as a genuinely good band, and the first instances of the phrase "singles band" started coming in to use to describe them.

1998 After a chance to think about their music and their direction, SFA decided to recorded a new EP in early 1998 at Gorwel Owen's house and released it in May. This was the Ice Hockey Hair EP, widely held as one of their finest moments.

Featuring four tracks, the EP presented SFA's unmistakable songwriting skills alongside fresh-sounding beats and loops sampled from Black Uhru. The title track, a melodic and very moving epic, gained airplay while "Smokin'" became another favourite with the fans. Its "I just want to smoke it" refrain won instant appeal and approval. In a Melody Maker (RIP) interview, SFA said the "Smokin'" refered to smoking haddock, or to lorry drivers' tyres when they're 'burnin' the roads'. It became their most successful single up to this point, and gained them an incredible performance on "Top Of The Pops".

In November, the album Out Spaced was released. A limited edition appeared in a comedy rubber sleeve, shaped like a breast. The album consists mainly of B-sides, but also a few songs from the Ankst EPs of 1995.

1999 1999 proved to be a big year for the Furries. NME readers named them Best New Band in January. In May, the single Northern Lites preceded their most experimental and modern-sounding album up to this point, Guerrilla.

Guerrilla, recorded at the Real World Studios, was noted for its experimental leanings. Layers of samples over brass, percussion and Gruff's melodic howlings made this album something very different. For the cover art, Pete Fowler created the Furries' first three-dimensional models, rather than paintings. Furry monsters suddenly came into existence in the real world!

After headlining several of the summer festivals, SFA released Fire In My Heart, the most soulful and the only acoustic track from Guerrilla. They then embarked on a US and UK tour, playing in Aberdeen, when I managed to miss them again. :( SFA finished their UK tour at the CIA in Cardiff, where they showcased the first ever concert in surround sound - something which was going to feature a lot more in the future.

2000 January 2000 involved a series of changes for SFA. The last single from Guerrilla, Do Or Die was released. It was also the last single SFA released on Creation Records, as founder Alan McGee set off to pursue other interests (he now runs the Poptones label, home of the Hives).

May 2000 saw SFA return to their roots when they released the Welsh-language album Mwng. Meaning "mane", its lilting, acoustic melodies proved SFA as 'proper' songwriters after the experimental pop of Guerrilla.

A limited edition (of 3000) 7" was released, Ysbeidiau Huelog. It came backed with Charge, an interesting pseudo-instrumental track recorded as a Peel Session.

2001
Album rumours prevailed in 2001 until an official announcement was made about the new album, "Rings Around The World".

The single Juxtapozed With U was released on SFA's new label, Epic, to much airplay and TV appearances. The album followed soon after, to widespread critical acclaim, and was a great success, even reaching number 1 in the midweek charts.

Later singles (Drawing) Rings Around The World and It's Not The End Of The World? didn't do so well but still received some airplay, notably loads on Radio 2.

2002
The band are recording a follow-up to "Rings", as well as touring Europe and America. There are rumoured to be 44 new tracks already.

July 14th Golden Retriever released as a single with B sides Blue Fruit and Summer Snow (also released on picture disc and DVD).

Oct. 20, Hello Sunshine is released with Cowbird and Sanitizzzed as B sides.

The Furries joined Grandaddy on a short US tour to support Phantom Power.

Voted amongst the Best Bands in Britain in the Guardian, October 2003.

Headline the Radio One Stage at Reading and Leeds.

2005
This will be an explosive year for SFA!

Gruff does small tour for Yr Atal, which includes one date in NYC.

SFA Songbook released, all SFA singles and the DVD contains the videos plus a terrific 40min. documentary, American Sasquatch.

The US Release of Ffa Coffi Pawb "Am Byth"

The spring will bring the US release of Fuzzy Logic, Radiator, Guerilla and MWNG all with their respected B-Sides

7th studio album to be released August 22nd, will be titled "Love Kraft". The album will feature the much talked about and anticipated song "Zoom!". The album will feature songs written and sung by Bunf, Daf, Cian and Gruff. Other song titles include: "Laser Beam" (which will be the first single off of Love Kraft, release date August 15), "Ohio Heat", and "Oi Frango".

May brought a short UK tour of small venues to highight the new album, which will be followed by the Summer Festival circuit, UK tour in September and a rumored US tour in October/November.

What a great year to be a Furry Fan! 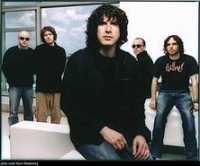