Ever get the feeling no one's got your back

Caught up in themselves livin' lies besides the fact

Somehow you're going on an opposite track

As we recover from another social heart attack

You think you see between the lines

But you can't see through dollar signs

So sick and tasteless now

Immature and faceless how

Can I even sleep at night you ask

You say you're a pacifist

Instead you wave your fist

And all the while it becomes the end again

Make up your mind cause I can't decide

You think uniqueulism makes you dignified

You can't see with half opened eyes

You think you're standing up instead you're falling far behind

If your life was a book your story would be fiction

Nevertheless am I dressed for the occasion

It's number 32 now here's the situation

If the beat moves your feet then don't change the station

Pack your bags cause we're leaving on a permanent vacation

Put on the tape, I'll rock your ghetto blaster

It's not about the money, cars, hotels, or resorts

About sweating all the bitches in the biker shorts

And I'm Bizzy D from way down town

When I'm on top I'm gonna borrow that bootie

When I wake up I like a pound of bacon

Start off the day with my arteries shaking

You see me in 3D, I'm comin' live and direct

With a dialect most men in science can't disect

Thoughts interwoven, and let us interlock

Sum 41 get wild, I get frantic

And every time we spit it the world panicks

I maybe lost my mind well I ain't through the coop

But Sum 41 just ain't about a loop

Ring a ling a ling ding dong tick tock, shit, it's all about rap

And maybe all about rock! 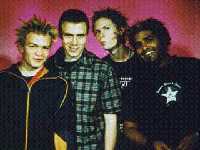