At 13-years-old, pop singer Stevie Brock is quickly proving that the buzz surrounding him is more then just hearsay. After spending much of 2003 touring around the country, Stevie has learned that being a pop star is a lot of hard work. However, he is having no problems capturing the hearts and minds of young fans everywhere as he quickly rises to become the new IT boyif his generation and garnering constant coverage and pinups in national pop magazines.

Raised in Dayton, Ohio, Stevie has an unbelievable gift for music. His parents noticed early that his abilities allowed him to carry more than just a tune, as their son began singing at the age of two and writing songs ar eight years old. In 2003, Stevie's songwriting and vocal talent landed him on the roster of WIRE Records, the Orlando-based label owned by Johnny Wright.

All For Love and If U Be My Baby, the first two singles grom Stevie's self titled debut album, are currently being played on Radio Disney stations nationwide, and his "All For Love" video can also be seen on Nickelodeon's Video Picks. Stevie can also be heard singing his infectious version of "All For Love" on Radio Disney Jams Volume 6 and "Zip A Dee Doo Dah" on the Disney Mania 2 album. Radio Disney as well, giving Stevie 3 songs on rotation at the same time on Radio Disney--no small feat--and had him joining ranks of a select few such as Britney Spears, Hilary Duff, and Aaron Carter.

Stevie has been continuously collecting fans and has been touring non-stop since his album debut. He toured last summer with Aaron Carter throughout the US, headlined a School TOur last fall and also headlined Radio Disney's Jingle Jam Holiday Tour 2003. He's gearing up to continue touring through the spring to promote his CD, and there's no chance of slowing him down.

Stevie's love for music, his devotion to his fans and his overwhelming drive has helped him reach incredible goals in his short 13 years of life. Becoming what he is meant to be in front of the world is a challenge that he is ready and willing to embrace utilizing the talents that will undoubtedly launch his career to super star status. 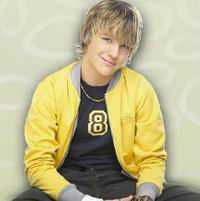