He would later, head off to military school in Tampa, Florida. As Stephen puts it, he witnessed great music in in Florida, heard and played on back porches, "incredible music" floating over the orange groves. Picking up blues sounds, along with his dad's old blues records.

Also, he would be a traveler, traveling with his parents, from Louisiana, to Cuba. Enriching his soul with everything from Bluegrass, to Latin beats.

Prior to 1964, he was in a group called the Company, in which he met a future bandmate Neil Young, and they agreed to keep contact, even though they were working in other projects. In 1964 he would join his future bandmate, Richie Furray in folk group called "The Au Go Go Singers." Stephen's broad vocals would carry even in the earliest of his music, and two vocally incredible songs would be produced on this album by him, "Miss Nellie" and "High Flying Bird," displaying rich vocal roots, with a soulful voice, on their first and only LP, "And they call us Au Go-Go Singers."

Then during the mid 1960's, he would meet Neil Young, on the freeway, as Stephen spotted Neil and Neil spotted Stephen, and things began to get arranged. They would form a band, with fellow friends, Richie Furay, Bruce Palmer, and Dewey Martin (and later, Jim Messina). And what lied ahead would be a very bumpy ride for all of them, through fame and tribulation....

During this time (around 1968) Stephen would met David Crosby (a member the of the Byrds) and Stephen asked David to join Buffalo Springfield on stage at "The Montery Pop Festival" when Neil didn't show.

Later, Mama Cass would first set up a meeting between David and Graham Nash (a member of the Hollies, a Mersey group) at her house in California. She and David would then bring Graham to meet Stephen. Graham would later say in an interview, that, he saw a blonde haired guy sitting at the piano, banging the shit out of it, as David opened up the door and said "THAT'S Stephen."

It was there they discovered their incredible harmonies together. And as Joni Mitchell would say, they would just sit, sing a few notes and fall over laughing, because they couldn't believe the incredible sound of their voices mixed so well together. Later that year they would record a spectacular debut album titled "Crosby Stills and Nash," the album famously referred to as "the couch album." Stephen would play most of the instruments featured and help produce. He would learn from Bill Halverson the ins and outs of producing and arranging. Some of the songs on this album would include "Suite: Judy Blue Eyes" (Stills) written for Judy Collins, "Wooden Ships" (Crosby, Stills & Paul Kanter of the Jefferson Airplane), "49 Bye-Byes" (Stills),"Helplessly Hoping" (Stills) and "Pre-Road Downs" (Nash). The album has and still has an incredible impact...

In 1969 they would play at the music festival "Woodstock", which would only be CSN's second time performing with each other, and in which Neil Young would join them for a second time.

And Neil would continue to perform and work with them, as they would continue to play gigs, including "The Big Sur Folk Festival." Another album surfaced in 1970, titled "Deja Vu." Some songs on this album would include "Helpless" (Young), "4+20" (Stills), "Woodstock" (written by Joni Mitchell),"Our house" (Nash) and "Almost Cut My Hair" (David Crosby.) They would tour after that until 1971, when they went their seperate ways.

(CSN&Y would also release a live album called "4 Way Street" from these performances, mostly from the Fillmore) During 1970 and 1971 Stephen would produce two solo albums titled "Stephen Stills" and "Stephen Stills 2." On "Stephen Stills" songs included in his classic poignant style are "Love the one your with" and "We are not helpless." That album would also include guest appearances by David Crosby, Graham Nash, Eric Clapton, Rita Coolidge and Ringo Starr on drums. The second solo album would dig more into his solo career, with songs including "Change Partners" and "Singin' Call."

In 1972 and 1973, Stephen would join up with his friends Chris Hillman (former member of the Byrds), Joe Lala, Al Perkins, Dallas Taylor, Fuzzy Samuel and Paul Harris to form the band Manassas. They would release two albums including their debut "Stephen Stills & Manassas" - with songs such as "Jesus Gave Love away for free," "Rock 'N' Roll Crazies," and "Jet Set (sigh)," blending a potpourri of Rock 'N' Roll, Blues and Latin rythems. And "Stephen Stills & Manassas - Down the Road." With songs like "Pensamiento" and "Do you remember the Americans?" incorporating the same distinctive sound...

In 1974, Crosby Stills Nash and Young would return and tour. Playing large stadiums such as Wembley. In 1975 he would venture off on another solo album titled "Stills" (songs including "Turn Back the Pages," "To Mama from Christopher and the old man" written for his brand new child, Chris, "As I come of Age," "Myth of Sysiphus" and "Cold Cold World."

In December on 1975, another album of Stephen's would be released titled "Stephen Stills Live", a collection of live in concert songs. And following this in 1976, with not only a brand new album under his belt, "Illegal Stills," he would then embark on a new venture with his fellow compadre Neil Young, an album and tour for "Long May You Run."

It would be 1977 when he would rejoin and he and friends Graham and David would make amend, to record their album "CSN", putting out such great passion envoked tunes including "Shadow Captain" and "Dark Star."

In 1978 he would take a chance and release of another solo album titled "Thoroughfare Gap". This album was not popular among critics, but well received by many fans. From dance beats in "Can't get no booty," to the pure awesome beauty of "Thoroughfare Gap," the title song. Spacing himself, a few years later in 1982 he would continue to record more albums with CSN such as "Daylight Again", and "Allies," both inspiring the "Daylight Again" tour.

Another solo album "Right By You" would make it's debut in 1984, including a song he co-wrote with his son Chris titled "Stranger."
1988 would show a release of CSN&Y's "American Dream" and newly found peace amongst themselves. A very underated album. CSN's "Live it up" would also surface in 1990, along with a tour. And in 1991 a acoustic solo album titled "Stills Alone", with such amazing work as "Isn't it So?" and "Tree top flyer" - in which you can almost feel what he's writing. CSN's "After the Storm" hit the stores in 1994 - in which his son Chris and daughter Jennifer would make guest appearances.

In 1997, Stephen would be the first person in Rock history to be inducted into the Rock 'N' Roll Hall of fame twice in one night. Once with Buffalo Springfield, and second with Crosby Stills & Nash. And in 1999, they would release "Looking Forward." The first album they have worked on with Neil since 1988, and would tour supporting this album on their CSNY2K tour, there first cross US tour since 1974. This album would bring out such tunes in Stephen such as reggae inspired "Faith In Me," Dylan inspired "Seen Enough," roof-tearing "No Tears Left" only proving more than Stephen has not lost any ability to move us.

He would then embark on doing another tour with CSN, and dashing a few solo gigs in 1998. 1999 and 2000 would be a stretch of a couple of ground breaking years for not only him but the band, when they would reunite with Neil Young, to produce "Looking Forward." They had originally planned to do a album as just CSN, when Neil had called Stephen on the phone and his visit would spark the idea of doing an album together. 2001 would prove to be another good year for CSN, as they would make their summer tour, and then to reunite in 2002 for their "Tour of America" with Neil.

Rumor has it, he is now working on a new solo album. Lets hope this one is true. : ) 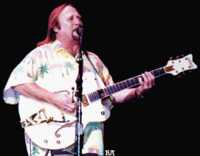