SpongeBob SquarePants (often referred to simply as SpongeBob) is an American animated television series, created by marine biologist and animator Stephen Hillenburg.
Much of the series centers on the exploits and adventures of the title character and his various friends in the underwater city of "Bikini Bottom". The series' popularity has prompted the release of a media franchise, contributing to its position as Nickelodeon's highest rated show, the most distributed property of MTV Networks, and among Nicktoons' most watched shows.

As of 2011, SpongeBob SquarePants is the only Nicktoon from the 1990s that has not ended yet. The show is listed 15th in IGN's top 100 animated series list. It is also known for being one of Nickelodeon's longest running TV shows.

The basis for SpongeBob SquarePants was formed by Hillenburg in 1984 while teaching and studying marine biology at the Ocean Institute in Dana Point, California, where he wrote the comic strip The Intertidal Zone, which starred various anthropomorphic forms of sea life, many of which would evolve into SpongeBob SquarePants characters. He left the institute to become an animator in 1987, and later attended the California Institute of Arts in 1992. In the institute, he made his thesis film Wormholes (1992), which led to his hiring as a director, writer, producer, storyboard artist, and executive producer of the series Rocko's Modern Life by creator Joe Murray. He started to develop the series in 1996 following Rocko's Modern Life's, and pitched the series to Nickelodeon in 1998 and was later greenlit for a first season.

The pilot episode of SpongeBob SquarePants first aired episodes in the United States on Nickelodeon on May 1, 1999, following the Nickelodeon Kids' Choice Awards. The first episodes were called "Help Wanted", "Reef Blower", and "Tea at the Treedome". The "official" series premiere followed on July 17, 1999, with the second episode, "Bubblestand/Ripped Pants." The show reached enormous popularity by 2000 during the second season, and has remained popular since.

A feature film of the series was released in theaters on November 19, 2004. The series celebrated its tenth anniversary on July 17, 2009. SpongeBob was renewed for a ninth season on January 3, 2011. So far the series has aired 320 individual episodes. 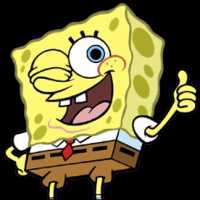