In 1998 Spice 1 put out a "greatest hits" album. Not many rappers can release such an album without playin themselves. Spice 1 could do that. He was one of da originators and tho sellin multiple-platinum he kept it real till now. Back in the day gangsta rap was growin. N.W.A. put it down for L.A. and espicially Compton, Geto Boys put it down for da South. But in the Bay area there was still much East Coast influence, battle rappin or the positive Black tip. Spice was da first who spit gangsta shit in da Bay, he was da Eazy-E of Oakland. He did his stuff solo but he influenced many other rappers. He was da one in da Bay area who spit 100% gangsta, shit to which niggaz could relate to.

In 1991 he released his first album "Spice 1". It was da right stuff at da right time, juss when N.W.A. were popular as never before. As Spice himself says: N.W.A. and Too Short were da biggest influence for him. Some of da best songs are: "welcome to the ghetto" (the first single), "in my neighborhood". Then in 1993 "187 he wrote" followed. This shit bumped him up to a well-known MC, it went platinum. It was not juss a one-hit album, every song was a hit. Tight songs are: "trigga gots no heart" (also available on da Menace II Society soundtrack) and "the murda show" feat. MC Eiht. With da success came jealousy, stupid muthaphukkaz called him a "studio gangsta" but i can tell ya this man knows what he raps bout. This envy didnt stop him.

In 1994 he recorded his (from my point of view) best album "amerikkka's nightmare". I cant count the bomb songs that are on this shit. He got E-40, Method Man and 2Pac (another 2Pac - Spice 1 song is on Pac's "r u still down") on it. A very cool song is "strap on the side", the almost nice and party-like keyboard melody can make the listener forget da "trigga-happy" content of this song. As not many other niggaz Spice raps bout guns, gatz whatever. Now Spice also made his flow better. He raps now as fast as not many other MCs. Some of his producers became famous thru him like Blackjack and E-A-Ski. Then in 1995 Spice 1 released "1990-sick", he got a great fanbase now, he got influence in da business.

With this album he showed that he was still in da game, spittin it 100% gangsta. After a small break he came back in 1997 with "the black bossalini", itz a very tight album. He got so many cats on there, Yukmouth, Syke, Mack 10, Kokane, Ice-T, MC Breed, Too Short. Paris, Payback, Ant Banks and others were behind him, this shit is tight as hell! So in 1998 the "hits" album was the proof to show how important Spice 1 was for hip hop. He began as an unknown MC, produced many of his tracks on his own. he was da first gangsta from da Bay, he got songs bout gats. He influenced 2pac, 3-6-Mafia, Luniz, he brought da fast style as one of da first MCs into da game. Even one single song "the gas chamber" influenced C-Bo to call his debut "gas chamber", there wud be no E-40, no one of the others today well-known Bay cats out there without Spice 1. Blawwwwww!!! 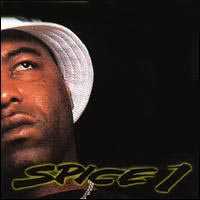