note: this is 'A' biography but rather cobbled together

"Name: M. Doughty
Birthday: June 10, 1970
Birthplace: Fort Knox, Kentucky
Height: 6'1"
Does: Speaking, singing, electric guitar.
Grew Up: Military Brat, lived many places
Musical Training: None, although he's studied poetry at New York's New School.
Dwarf Name, according to himself: Spacey
Distinguishing Marks: Tattoo of Louise Brooks, with the a quote from e.e. cummings: "The moon rattles like a piece of angry candy.", tattoo of the number 7.
Ambitions: Oh, you know...roof, food, etc.
Turn-Ons: Elegance, sarcasm
Turnoffs: Senseless slaughter of innocents
Underwear: Boxers, publicly, at least.
When I get stressed out I: tend not to answer questions lifted directly from a back issue of Tiger Beat
My best feature is my: ability to dodge said questions
The most embarassing thing I ever did was: truly not much of an embarassment at all.
How to get my attention: Uh, there's always nudity or free cheese.
Musical influences: John Lee Hooker, Journey's"Don't Stop Believin"
Also known as: Margot Channing, Moschiach and Mr. Blobby
My motto: (Blank stare)"

--a long time ago i wrote this: new thoughts below it
this guy does vocals and guitar. i think he is pretty fucking neat. here you can see him looking for stuff.
doughty, in my humble opinion, is a pretty rad guy, but i've never spent time with him. someone i know, has spent time with him, and she thinks he's quite an asshole, so im not really sure what to say about that. but he sings and i listen. since their crappy break-up, doughty has continued to work on his solo efforts, he writes for some paper, has a book "slanky" out, an older album called "skittish" and his works with Soul Coughing.
-this was from last year.

NOW: i still think that doughty, sorry, Michael Doughty is a pretty cool guy. but he's also quite an asshole at times :)
ever since the band broke up, i have been doing my best to see his olo shows often. they are often better than good, but sometimes because of crowds or other things...well...
i now own slanky, which i think is a wonderful book of poetry, and in my opinion, doughty(im still going to call him that) should write some more and read some more and print some more. im not sure where you can pick up a copy of this allusive book today but check out doughty's superspecial page since the band broke up, and doughty has begun to clean up, he's put on a little weight, but he's still making some good music. I've had a few run ins with the guy, and hes... well, allright. not always a friendly as you'd expect since he isnt quite such a huge "rockstar" anymore. but he puts on a good show.
skittish is also a great album, not quite how the songs are done live anymore, but worth the 10 bucks to pick it up at a show. the official version is slightly different than what you will(i think still...) find on mp3. when i saw him last, he was still playing his little funky guitars, but i hear he's picked up a big one, and im not sure how i feel about that.
during his shows, doughty has an odd tendancy to stare at, or make faces at people, try and catch his eye.

Mark
"Name: M'ark De Gli Antoni on the first album, Mark De Gli Antoni on the second (the apostrophe's missing).
Birthday: June 20, 1962
Birthplace: San Francisco, CA
Height: 6'0"
Does: Keyboard sampler, background vocals.
Grew Up: San Francisco Bay Area
Musical Training: Trained classical composer; he uses samples of his works in Soul Coughing songs.
Dwarf Name, according to Doughty: Horsey
Distinguishing Marks: "africa on his brisket- birthmark"
Ambitions: In the process of being realized
Turn-Ons: Toasty parts, pole vaulting, oysters
Turnoffs: God, Paul and Linda...
Underwear: Boxers
When I get stressed out I: stay awake for days
My best feature is my: legs
How to get my attention: Shiny parts
Musical influences: Uh...
Also known as: The Horse
My motto: A warrior is impeccable when he trusts his personal power no matter how large or how small.

OLD THOUGHTS:
here he comes, bringing in the horse...
Mark is the sampling man. hes really good at it, and it is neat. Mark alone has just put out a cd, "horse tricks" it features his composistion and sampling styles. i think he had a real music education, not something you often find in, he he, "rock" music.
NEW THOUGHTS:
well, really havent seen head nor tail of this guy. im not sure what he's up to. i picked up that disc a while back too, look for it in the soul coughing section, cause music store employees are real bright. some of the songs are sampled in various SC mp3's. and i think that without him, its just not SC. doughty's good, and UV ray is good, but without mark, it doenst have that special(Doughty's lyrics are a big part tho, dont get me wrong) SC feel.

Name: Sebastian Steinberg
Birthday: Feb 20, 1959
Birthplace: New York City
Height: "7"
Weight: "Enough"
Does: Upright Bass, Backing Vocals
Grew Up: Massachusets
Dwarf Name, according to Doughty: Grumpy
Distinguishing Marks: "i was sent to a really wierd camp when i was a kid, i don't wanna talk about all those scars on my back and arms....."
Ambitions: Yup!
Turn-Ons: You bet!
Turnoffs: Even more so!
Underwear:
When I get stressed out I: boil alot of water
My best feature is my: tolerance
The coolest thing I ever did was: have a phone bill larger than anybody from Boys to Men.
How to get my attention: Wave alot of money around while naked
Musical influences: The Honky Dingalong
Also known as: Phone child

sebastion is the bass thumper. since i have the same birthday, and also grew up in massachusetts, he has a special warm place in my hear..tho i still dont know much about what he's up to. I was under the impression at one point that he was in UV ray with Yuval... but when i saw UV in Jamacia Plain..there was no sebastian to be seen.
for me, another big part of SC were the giant bass lines(oh wait, i guess each one of them made SC what it was...didnt they..Yuvals mad skills, the great base, the magic samples, and dougty's redonkulous voice/lyrics... who knew? maybe thats why they were so fucking outstanding, so above the shoulders of the rest of the music world.) and sebastian ripped them out. but i dont know what he's doing either...

Yuval
Name: Yuval Gabay
Birthdate: July 23, 1963
Birthplace: Jerulselem, Israel
Height: "7"
Weight: "7"
Does: Drums, Backing Vocals
Grew Up: Israel
Dwarf Name, according to Doughty: Uh.. Yuval. You don't get much more Dwarfish than Yuval.
Distinguishing Marks: Fly style
Ambitions: 7
Turn-Ons: Excelency, warmth, shiny things
Turnoffs: Inablitiiy to chill, no leg room on planes
Underwear: Depends on the activity.
When I get stressed out I: smile alot and hand out candles
My best feature is my: hanging out late into the night
The most embarassing thing I ever did was: I touched Miles Davis' forehead on t.v. and got a look of "you must be..."
How to get my attention: dance, dance dance
Musical influences: Oh yeah, a whole lot of influences
Also known as: Honky Dingalong

now, like sebastian, last i heard, Yuval was doing his thing with UV ray. I saw him play with them a few months ago, and the man really knocked my socks off. UV is kinda this live, drum and bass jungle enssamble, and Yuval just tore those drums up with some amazing feats.
(you've-all gbye) 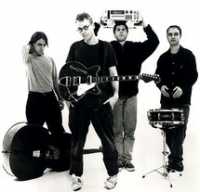