Time warp back to the '60s. Pop songs, ditties, the British Invasion, The Beach Boys, The Byrds, blah blah blah. With very few exceptions, pop-rock music was all about tunefulness - about making music that was pleasing to the ear. Of course there was an undercurrent of avant-garde and modern classical composers putting a dent in this wall of perfect harmony, but nothing that rocked the boat on a very large scale.

As the years dragged on, the ear-pleasing hits multiplied, and despite innovations from Hendrix, The Velvet Underground and their ilk, the discovery of noise and discordance took a long time to catch on. The '60s rolled into the '70s, and the '70s were almost rolling into the '80s before the punk movement finally exploded. And even punk wasn't that discordant - dust off your old Sex Pistols and Clash records and listen to how catchy their songs are underneath the snarl and the angst. It was only once the aftermath of punk started bleeding into 'post-punk' that bands seemed to realize that it made sense to integrate pure noise into the traditional harmonic scale. And this is thanks to Sonic Youth more than any other band.

As Stephen Malkmus says during the opening chords of a song on Pavement's "Stray Slack" bootleg, "This one is for Sonic Youth. Obviously." Try for a second to close your eyes and imagine a world without Sonic Youth. How would history have changed? Ever since the dawn of the band in 1981, rising up out of New York's fertile underground and the teachings of avant-garde composer Glenn Branca, Sonic Youth have more or less set the agenda. It was largely thanks to their years of dedication that they ended up setting a precedent for independent music being released on Geffen, and they were directly responsible for getting Nirvana signed to said label. So one could say that an SY-less world would have very likely never seen the dawn of the age of grunge. They released a video during this period called "1991: The Year That Punk Broke." And break it did. Nirvana's success finally toppled the musical hierarchy of established music surrounded by a fringe of anti-establishment underground music. Nevermind hit number one,

And it doesn't end there. "Superchunk...Lemonheads...SST...," SY cry on "Screaming Skull," and sure enough, it's hard to imagine what such bands would sound like had they never tapped their feet to Sonic Youth records. Quintessential Canadian lo-fi band Eric's Trip named themselves after the beautiful track from Daydream Nation not so much because they were so inspired by SY, but because they were so inspired by that followed SY's lead. Sonic Youth weren't the first musicians to cull squealing feedback from their amps and call it music. Nor were they the first to shove drumsticks and other objects between their guitar strings, or to play the drums with maracas from time to time. Nor, come to think of it, were they the first to write songs in complex alternate tunings. Yet who else will be remembered for exploring these realms and exploring them in such depth?

Each of the four individual members' contributions to music warrants an essay of its own. Moore has worked on tons of diverse recordings with everyone under the sun, much of it available on his Ecstatic Peace! label. Lee Ranaldo, has explored everything from free-jazz to noise to pure pop. The latter has also written four books of journals and poetry which have won the endorsements of the late Allen Ginsberg, among others.
Kim Gordon has become a rock icon, arguably the strongest feminist role model alive in rock music. Screaming pre-riot grrl, cooing siren, wife, mother, clothing designer, purveyor of the avant-garde - a multifaceted, welcome presence in a world of Alanis Morrisettes, Courtney Loves, and Madonnas. Steve Shelley has also lent his hand (and drumsticks and maracas) to many a recording project, in addition to running the seminal Smells Like Records which has brought us Cat Power and Blonde Redhead among others.

Word now has it that Geffen has dropped the quartet, so it appears that Sonic Youth is at the dawn of a new age. Maybe, with the fresh theft of all their gear, there's a bad moon rising and trouble on the rise, but I rest assured that there's still plenty to look forward to from SY. 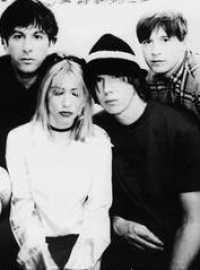