"We're nestled between Tallahassee and Panama City," s
Socialburn guitarist/singer/songwriter Neil Alday "Straight down I 20 Blountstown it's called." He's talking about the foursome's hometown, so small you'd have a hard time finding it on Mapquest (pronounced Blunts-town). He sprinkles a few details here and there about their similar upbringing as he valiantly tries to pin down some kind of recognizable latitude: "You know, a farming town. My dad builds houses. That's what he's always done. We all went to the same high school, (Blountstown High, of course). Alday continues, switching to a different kind of compass – the always enlightening band influences: "All kind of crazy stuff, anything from ays erle Haggard to Ween to Slipknot and just about everything in between."

And then the kicker.

"And three of us were homecoming kings, if you can believe that, huh?" In as non-plussed a manner as you're ever likely to hear, the ever-quotable Alday proceeds to talk about a mysterious song that closes out their searing Elektra debut, Where You Are. According to Alday, the song in question - "Stacy" is "Really not about a girl. It's about drugs. But I don't take drugs so I made it about a girl." He laughs and tries again. "You know, it's kind of disguised. It's about getting a big head and all that. But like I said, I don't do drugs. I'll have a beer, now and then."

He also writes muscular, melodic masterpieces Ð purposefully knotted by his scorching vocal style and a maelstrom of guitars that scrape and collide in all the right places, whether its the amped-up "Down," or the swampy chaos of "You." The album is helmed by noted Producer John Kurzweg (all three Creed albums, Puddle Of Mudd), his first project under his new production deal with Elektra. Kurzweg has wisely decided to leave the bark on Socialburn's songs, making Where You Are one of the scrappier, more effervescent debuts of the year.

Alday, Dusty Price (bass and vocals), Chris Cobb (lead guitar and vocals), and Brandon Bittner (Drums), are surely an anomaly in their part of the woods. Surrounded by cowboys and country music, they've forged a name for themselves in the alternative rock scene by releasing two of their own home-styled CD's. "My mom was printing up singles on her computer," says Neil. "She's a Petty and Dylan fan, by the way." Their homespun philosophy also applied to their choice of rehearsal spaces, with the band studiously practicing their chops in Ð where else - "the bedroom." Alday elaborates:

"That's where we practiced. In the bedroom. We just played there for two years. Even after we made up some CD's, we didn't even send them to any critics. I wasn't that interested in what they might have to say about us yet."

Alday does admit to blanketing Blounstown locals with with Socialburn discs, however. "There isn't a man, woman, or child in this town that don't have a Socialburn single," he laughs.

The steady-as-she-goes pursuit of rock stardom should come to no surprise when you hear how three of the band members decided to form the group. "We were sucker fishing one night Ð you know Ð that's when you catch the fish with your bare hands. Someone's usually got a campfire going when you're doing that. The three of us just started singing to a guitar. Next thing you know, we got a group." Chris would be the last member to join the group, with Brandon even giving up acting aspirations to make the band work. "I was taking acting at a small college in Florida for a while," he says. Eventually, Socialburn's hard work paid off, with a pretty good buzz building around the guys. It didn't hurt that the neighboring Tallahassee scene was also starting to catch fire. "But we're Blountstown all the way," says Brandon. He points to a song called "Ashes," as one that defines the band best. "I just think it's indicative of where the band is right now. A good hook, a real group effort. That's what we strive for."

Alday says most of his songs are about relationships. "Like on 'You' that was based on a certain girl who was having family troubles. We were kind of liking each other, and I was saying we can get through this together. You try to put it into words and at the same time want to capture a feeling that hits everybody a different way. It doesn't always have to be clear." It's precisely that kind of alchemy that makes Socialburn's songs so powerful. Take the frenetic burst that is the song "Happy." Despite the title, there's something in Alday's blighted, wistful snarl that makes the listener feel forlorn, with the singer nearly choking on the song's chaser "Yeah-I'm-hap-py-now." You're not quite sure that the love affair he's singing about was a good thing or bad.

Something tells you he wouldn't want it any other way. 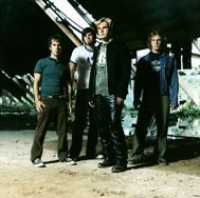