Snuff was first formed when 'but jim millions will die; drummer Graham couldnt make a rehearsal & Duncan from 'come what may' stepped in to help.A thrash version of purple haze was born. later both bands split up & Simon Andy & Duncan got together in 86 as Snuff.

Also during this time a folk side project called the Tank Tops was formed, with Duncan on fiddle and Andy and Simon playing other instruments that I can't remember right now. Nothing was ever actually released, but the Tank Tops promised to play a gig within 10 years. Though that doesn't look too promising....

Then something bad happened, Snuff broke up. A sad day for punk rock. Duncan, Simon, Andy, and Dave on Bone (who had been added as a full time member with the release Flibbiddydibbiddydob) went their separate ways and did their separate things.

Sometime after this (not exactly sure when) Duncan and Simon got together with Sean from Wat Tyler, and some other chaps, and recorded the URIN 8 7". The Bizzaresque E.P. is the only release that I know of that came out of this collaboration.

After the break-up of Snuff, Duncan switched from drums to guitar, hooked up with a fellow named Jools who played bass, and a guy by the name of Pat who played drums. The result was Guns 'N' Wankers. And they were great. Releasing some of the greatest song s I've ever heard. (Raise Your Glass is just too amazing for words.)

Meanwhile, back at the ranch, Simon switched from guitar to drums, got involved with this character by the name of Loz and released two records under the name Your Mum. The One sided 12" and the Your Mother 7", both on Rugger Bugger Discs. Both of these releases were later compiled onto the self titled Your Mum cd, also on Rugger Bugger

Now while this was going on Andy was absorbed by Leatherface and appeared on Leatherface records from Minx to The Last. He was also on the Live In Olso LP. Damn amazing rock music here. After Leatherface broke up, Andy followed Frankie Stubbs to the band Pope. One LP was all that came out of that, but it's quite an LP. For those keeping track at home, Frankie Stubbs then started a rock band called Jesse. They were really good too. But now they don't exist anymore as Frankie Stubbs and the bass player from Jesse, Leighton (who switched from bass to guitar), have reunited with the Lainey of the original line up of Leatherface and added a new bass player, therefore Leatherface is back together now.

Well, then by some miracle. The punk rock gods smiled and Snuff decided to give it another try. Duncan, Simon, Andy, and Dave reunited with new member Lee who rocks the Hammond Organ.

Oh by the way, Jools from Guns 'N' Wankers, who was the stand in bass player for snuff for a while, started a new band called Dog Piss. They had two 7"s on Rugger Bugger and a full length on Honest Don's before knocking it on the head.

This is where things get a little tricky. Sometime between the reunion of Snuff and the release of Demmamussabebonk, Simon left the band again. Rather than scrap everything this time, Loz from Your Mum was brought in to replace Simon as the axe man. They record Demmamussabebonk, and some singles and they toured and then...Andy left the band.

Again, rather than stop, a fresh face was added to the line up. Another Lee. The new bassist is Lee B. and the Hammond guy is Lee M. Confused yet? Well just in case you are, don't worry as Lee M. is off minding the garden now anyway.

Simon is currently in a new band called Southport that a rocking out in ways you can't imagine, Andy has moved on to a better place, and Sean Rugger Bugger hasn't taken his clothes off in public for a while.

As it stands that's the abridged history of Snuff. Not counting Erk the Merkan of the Pastetasters (Pietasters) who has done some touring duty in the year 2000 and who is also responsible for the Kentucky Fried Animal 53 logo. But that's a whole other story.... 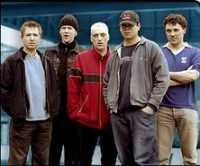