Throughout modern pop culture, melodic music representing the California lifestyle has always had its place (Beach Boys, Eagles, Grateful Dead, Red Hot Chili Peppers, Sublime, Jack Johnson to name a few), and every era yields a definitive reggae-influenced rock band with HUGE breakthrough commercial success (The Clash, The Police, UB40, Sublime, Shaggy, etc.). SLIGHTLY STOOPID, a clear descendant of that lineage, is primed to be a breakout act of 2003!

SLIGHTLY STOOPID possess a unique dynamic. They have a musical kinship so to speak, which is clearly the organic result of years growing up together in the setting of one of Southern California's premiere surf towns (Ocean Beach, San Diego), and the relentless pursuit of creating the quintessential soundtrack for the lifestyle that exists there. Miles and Kyle are perfect musical counterparts, complementing each other in the realm of electric and acoustic rock, reggae, dub, blues, hip-hop, punk, and metal. Boasting dual front men, SLIGHTLY STOOPID yield a rare chemistry as players. They are both multi-instrumental, oftentimes switching effortlessly from bass to guitar in the middle of their live shows, continuously balancing and bouncing their vocal stylings and fresh harmonies, and seemingly always converging into songs that are good enough to be respected by the very artists who inspire them.

Back in 1995 while still in high school, Miles and Kyle caught the ear of SUBLIME vocalist BRADLEY NOWELL, who then signed them to his own Skunk Records label. Bypassing the notion of a "golden ticket" from a major label, SLIGHTLY STOOPID also drew influence from the business acumen of their entrepreneurial predecessors. Staying true to the D.I.Y. ethic of punk rock, the band released its first two albums independently on Skunk. With minimal distribution (primarily in Southern California), the Skunk label released the punk tinged early debut SLIGHTLY STOOPID (1996) and the more produced reggae leanings of the band's surf inspired LONGEST BARREL RIDE (1999). A copy of the debut, which has been out of print since 1998 (and in high demand in reggae/punk circles), recently sold on E-Bay for $221.00!

After a couple of years of hardcore gigging, and between recording a legitimate new studio album, Slightly Stoopid delivered an unsuspected treat for their diverse audience. In the summer of 2001, Kyle and Miles performed an hour-long live acoustic set on San Diego's Clear Channel Rock 105.3 (one week after Jack Johnson did). The broadcast drew an onslaught of requests at the station, prompting the band to release the performance on CD, through their own "Stoopid Records" imprint. Titled LIVE AND DIRECT- ACOUSTIC ROOTS, this one-take marvel, features both players on solely acoustic guitars and vocals, and was recorded live- "warts and all", with no overdubs! The album has become a fan favorite having sold close to 20,000 copies, mostly at shows, through the internet, and a few select Southern California retailers. In 2002, the band included an acoustic portion as a special opening set at selected venues, most notably at Anaheim's House of Blues to standing room only crowds of 1,100 +!

Slightly Stoopid's new album EVERYTHING YOU NEED is the band's first legitimate studio-produced album in 4 years. A departure on some levels, EVERYTHING YOU NEED is really the culmination of a band reaching a new creative plateau. The 14-track album represents a natural progression from their previous works within its matured songwriting (the band members are now 24-25; they were just 16 when they first recorded!) and enhanced production value. The brand-spanking-new CD was produced by an array of talented soundboard manipulators including MIGUEL (Sublime, LB Dub, Unwritten Law), Dub legend SCIENTIST (recent mixes include Ben Harper and No Doubt), and CHRIS D whose PHILADELPHONIC sessions feature a special guest appearance from G-LOVE on "Mellow Mood." Stylistically, SLIGHTLY STOOPID has made a giant transition into forging their own original brand of music, however, without abandoning the philosophy of where they started.

"Everything really starts with acoustic guitars with us, I mean that's what we're jamming on when we're sitting around smokin' weed and watching T.V. " - KYLE

"What we tried to do with this album is incorporate every kind of music style that we play into each song." - MILES

"Musically I like everything- hip-hop , punk rock, acoustic music, acoustic music with hip hop beats, reggae, and heavy metal all mixed into one album. Pretty much, that's what I try to give 'em on every album, but each recording turns out different which is kind of cool." - KYLE

Having just enough experience, and barely enough dough through odd jobs and local shows to purchase their first touring vehicle back in '98, the band was realistic enough to know that solid long-term success would be proven through a consistent touring schedule. SLIGHTLY STOOPID have lived on the road and built a solid reputation as a bona-fide touring act. Four years later the boys are on their third Dodge van, and at least as many extended warranties! Amazingly, SLIGHTLY STOOPID has played over 500 shows and, along the way, have supported such acts as SUBLIME and LB DUB, G-LOVE & SPECIAL SAUCE, BLINK-182, 311, the WARPED TOUR, PENNYWISE, and DAMIEN "Jr. Gong" MARLEY to name a few.

By 2002, SLIGHTLY STOOPID achieved headlining status throughout the Western U.S., with sell out shows (500-1100 seaters) from San Diego through Colorado, as well as Seattle and the Pacific Northwest. The group's fan base has grown at a rapid pace, with the band (and promoters!) being accustomed to exponential growth at the box office at every repeat performance. "Ese Locos", the band's loyal street force and fans are from diverse walks of life, and the group's multi-cultural appeal ranges to a large demographic. Girls and guys, jam band hippies, punk rock "billies", skaters, surfers, and hip hoppers, it seems you really can find all walks of life grooving to a Stoopid show!

Eventually, amongst the haze of smoke, the band would even find reps from major labels inhaling at their live gigs, as SLIGHTLY STOOPID found themselves being courted by more than a few record company presidents over the last couple of years. However, in their quest for non-conformity, the group rejected 3 separate major label offerings to remain masters of their own creative control, and to hopefully control their own masters. After forgoing the major label route, the band signed with Southern California independent Surfdog Records in order to complete their fourth album on their own creative terms. This was seemingly a natural fit, as Kyle and Miles grew up surfing and have been jamming most recently at major surfing events such as The Philips Pro in Huntington Beach June 2002, and The Vans Triple Crown in Oahu, Hawaii Nov. 2002.

Slightly Stoopid's new long player, their first studio album in 4 years, is poised to be a spring and summer blockbuster, and the ultimate expression from an always vibrant California music scene. 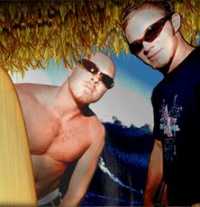