Skeeter Davis was a country star throughout the 50's, 60's and 70's who had some hits that crossed over to the pop charts in the early 60's. She managed to make the pop top ten on two occasions.

She was born Mary Frances Penick in 1931 in the Appalachian town of Dry Ridge, Kentucky, and raised on a farm. As a child her grandfather gave her her unusual nickname, because he said that she was always buzzing around like a mosquito. Even while very young her ambition was to be a singer. In high school she teamed up with a friend, Betty Jack Davis, to form an act known as the Davis Sisters.

The Davis Sisters -- who were the best of friends, but not sisters -- appeared on the radio in Lexington, Kentucky in 1949 and met with mild success. They became better known regionally and their circle widened to include television and radio appearances in Detroit, Cincinnati, and Wheeling, West Virginia. They signed with the Fortune record label and later with RCA. One of the recordings by the Davis Sisters, I Forgot More Than You'll Ever Know, reached the top of the country charts in 1953, when the girls were only 21 years old. And then tragedy struck.

An automobile accident involving another vehicle took the life of Betty Jack Davis in August, 1953 and left Skeeter Davis, as she was now known, critically injured. It took over a year for Skeeter to recover. Eventually she resumed her career, for a brief time with Betty's sister Georgia and by 1955, as a solo act. By the late 50's she was working with producer Chet Atkins, and scored her first solo country hit with Lost To A Geisha Girl. She followed it up with (I Can't Help You) I'm Falling Too, an answer song to Hank Locklin's Please Help Me I'm Falling. Skeeter moved to Nashville and realized a long-time dream by becoming a member of the Grand Ole Opry. In 1960 she married Nashville radio personality Ralph Emery. She dabbled with songwriting and co-wrote My Last Date (With You) with Boudleaux Bryant and Floyd Cramer. She also co-wrote Set Him Free which reached the top ten on the country charts. Two of these songs, (I Can't Help You) I'm Falling Too and My Last Date (With You), crossed over and became top forty pop songs in the early 60's. But major success in the pop field lay just ahead.

In 1963 Skeeter Davis had a tremendously successful country and pop hit with The End Of The World, which reached number two on the pop chart, was a huge hit for her in England, and became her signature song. Later that year she reached the pop top ten for the second and last time with a Carole King/Gerry Goffin tune titled I Can't Stay Mad At You.

Skeeter's marriage to Ralph Emery ended in divorce and later she was married for a time to musician Joey Spampanito. She continued to record on the RCA label, and put out some major country hits throughout the 60's and into the 70's. Among these were I'm Saving My Love, Gonna Get Along Without You Now, Fuel To The Flame, I'm A Lover (Not A Fighter) and Bus Fare To Kentucky. She recorded duets with recording stars such as Porter Wagoner, Bobby Bare, the BeeGees, and George Hamilton IV.

In 1976 Skeeter signed with Mercury Records. Her string of hit singles came to an end but she continued to be a popular live act. Skeeter's autobigraphy Bus Fare To Kentucky was published in 1993. She eventually acquired her own music publishing company.

The End Of The World is the song that is most closely associated with Skeeter Davis. 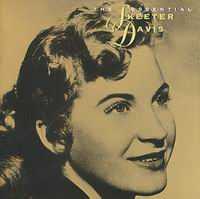