Formed as a side-project by Barnes and Obituary guitarist Allen West in 1993, Six Feet Under took on a different complexion when Barnes was ousted from his then-priority band, Cannibal Corpse in 1995. The semblance of the side-super group-turned leaders of the resurgent death metal underground changed once more in January 1998 when West left the band. Enter former Massacre guitarist Steve Swanson. "Steve learned 17 songs in the three weeks leading up to tour," he says. "Our songs may not be the most technical [pieces] ever written, but Steve performed them on the road like he had been playing them for years."

Ironically, when the band first gathered in Tampa, Florida to begin writing tracks for what would eventually become Maximum Violence, they were at a loss. Would they continue down the experimental path they had headed on 1997's Warpath or would they return to their cutting-edge death metal roots? "We had a new guitarist, so the songwriting assignments had changes considerably," recalls Barnes. "We went back and forth trying different stuff. But eventually things came together in a big way." Not only has Barnes has returned to his roots vocally, but as evident on songs such as "Hacked to Pieces" and "Bonesaw," his trademark gory lyrics are also back. "My words are an extension of what I'm feeling at [a given] time," he explains. "That is the way it has always been. My lyrics are comprised of thoughts, fantasies and fictional notes. People will get them when they read the lyrics."

Maximum Violence was recorded from February-March 1999 at Criteria Studios in Miami and was produced by the band and Metal Blade head Brian Slagel. "We recorded a couple of songs for the EP [1996's Alive and Dead] there," says Barnes. "It's a really comfortable studio with a real good vibe. The obvious thing for us would have been to stay local and record at Morrisound. But we thought of ourselves as a new band and wanted to start off fresh." A limited-edition' digi-pack version of Maximum Violence is also available, containing two covers, Iron Maiden's "Wrathchild" and a cover of Thin Lizzy's "Jailbreak," which are in addition to a reverent rendition of Kiss' "War Machine," which appears on all versions of the album. 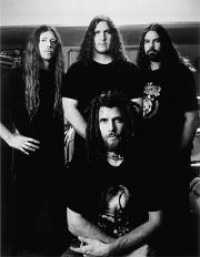