SUbSET, a union between multi-platinum selling artists Sir Mix-A-Lot and the ex-Presidents of the United States of America, has been quietly flooring rabid audiences in Seattle with selected "test gigs" at venues like the Showbox, Crocodile Cafe, and the Seattle Center's popular outdoor "Pain In the Grass" series. Now, Seattle's best-kept secret for the past twelve months is about to get out to the rest of the world.

Subset is a completely new entity that incorporates the respective strengths of both artists... the quirky pop sensibilities of the ex-Presidents; the street-smart storytelling wizardry of Sir Mix-A-Lot ... to create an original sound that's quite unlike anything you've ever heard before.

As ex-President Chris Ballew tells it: "We're getting to express something we weren't able to with the Presidents. We've always had groovy, funky riffs lying around. Subset is like a car chase spectacular with Mix's rap on top of all of that ... you bring your ass and we'll make sure it gets kicked. We exclude no one. All we're concerned with is making an album full of A-Sides. "

So far, those "A-Sides" include the hypnotic funk of "Fame Kills", a serni-autobiographical rant from Mix comparing stardom to a deadly addiction where surreal sounding guitars echo in and out of a haunting, but deliciously bass heavy rhythm track. "Blood From A Stone" finds the trademark Presidents pop quirkiness well intact, but with a far looser, more relaxed sounding groove, which kicks into high gear with a mid-song rap from MixA-Lot. "Something Wicked" is a slow-building pressure cooker which sucks you in before climaxing in a borderline metallic crescendo.

"The one thing I didn't want to sound like was the guest rapper on a rock record Mix-A-Lot says, "The difference is this shit flows."

Subset is an unlikely collaboration to be sure. But given the histories of its parts, it is one which makes complete sense. Sir Mix-A-Lot has already made history as the only multiplatinum selling rap artist to ever come out of Seattle ... earning a Grammy in the process for "Baby Got Back", 1992's second biggest selling single. The twice Grammy nominated Presidents of the United States of America likewise forever shattered the "Grunge" stereotype associated with Seattle with such unique quirky alterna-rock tunes as "Lump" and "Peaches" from their multi-platinum selling debut.

With Subset, these seemingly implausible collaborators have come together to create a band that is bigger than the sum of its parts. Subset... look into it. 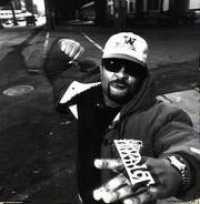