I have eagerly been awaiting the release of this CD for two years now. I first heard Sinisstar back in 2000 on the Heavy Metal 2000 Soundtrack. The track they contributed to that disc, "Psychosexy," was by far one of my favorites on the album, so I took to the web in search of info on the band. There wasn't much but the one item I saw reported the most about the band was how they landed their record deal. The impression I got from those reports was the band basically popped up on the Los Angeles music scene in the 90's, after the original three members, vocalist Edgy, bassist Shadow and the group's original drummer, moved there from Seattle in hopes of landing a deal. They took the same avenue as most aspiring bands, playing gigs in grungy Hollywood clubs, shopped their demo tapes and concentrated on perfecting their craft. Then things suddenly heated up with record labels battling it out to sign the group. At the end of the bidding war, Geffen Records emerged the victor by offer Sinisstar an impres
sive seven-figure deal.

Deal in hand; the group went into the studio to record their debut album. Most of the tracks were produced by Bob Marlette (Black Sabbath, Alice Cooper) but the band also worked with producer Brendan O'Brien (Offspring, Stone Temple Pilots, Pearl Jam, RATM). In the meantime, the band was able to perform in front of fan packed arenas on the Anger Management Tour with Limp Bizkit and Godsmack in 2000, as well as The Demon Speeding tour earlier this year with Rob Zombie and The Damned. Now, two years later, the world will get to hear the result of their studio labors with the release of their debut album, "Future Shock" on June 11th.

With a two-comma investment in the band you would expect Geffen to be going on a hype barrage with the release of "Future Shock" but they have actually taken a more low-key approach to the album. I don't know what the thinking there is, perhaps they are biding their time and don't wish to hurt the band's long term potential by creating a negative backlash by over hyping them? Time will tell, but after listening to "Future Shock" myself, I can comfortably state that the band does have the making for stardom.

The typical make it or break it avenue of hoping for the success of a single to break a band won't work here. It's not that Sinisstar doesn't have an album track worthy of being a single. Not at all, in fact they have quite a few tracks on "Future Shock" that could break through and pound their name on to the charts. The problem arises that what the band has to offer musically cannot be expressed by one single song. They really do cover a lot of ground and people who love a certain set of songs are not necessarily going to love another set.

This kind of diversity is a breath of fresh air in this age of monotonous songwriters who seems to rehash the same tricks 10 times for an album, but the problem here is one song may become a huge single and give people the impression that's what the band is all about, when in fact, if they listen to the entire album they will find a lot of material coming from different places. And just when you thought you had them figured out, they throw a curveball at you and take off in a totally new direction. That's one of the things I happen to love about this CD, it possible listen to it from start to finish and not get bored.

The lead off track and first single "White Noise" is perhaps the most radio friendly song here, it has elements of the heavy guitars mixed with rich vocal harmonies that helped put Lit on the charts but you won't find Sinisstar wimping out in order to get the attention of your little sister. All she has to do is look at their photo and that will be enough to scare the hell out of her and leave you to enjoy the CD for yourself.

It's apparent that "White Noise" was put on here with radio airplay in mind, because most of the album takes a markedly different direction. On tracks like "Freak Of Nature", "Do It", "Drug Related" and "Electric " it's a whole other ballgame. Imagine what would happen if Nine Inch Nails took a break from recording "Pretty Hate Machine" and got together and jammed with Rage Against the Machine before Zack left the group. It's a powerful and effective melding of rap-rock with an industrial backbone that also includes some killer guitar leads. Before you automatically tune out because I mentioned Rap-rock, read on…

The industrial elements are prevalent on most of the disc, because of this and the group's image some misguided critics have compared Sinisstar to Marilyn Manson but that comparison is a bit off the mark. Sure they opted for a dark and well sinister image but the music is a different story. There, they are a closer match to Nine Inch Nails' style, not the Mansonized gothic version of industrial. That's not to say that Sinisstar is yet another in a long line of NIN knock-offs, if anything they take the foundation that Rezner laid and take it in a different yet logical direction. Plus there is no lack of lead guitars on this album. As for the rapping, Edgy has more of a forceful scream than what you have come to expect from rock-rappers. He does have a similar tone as Zack from RATM but he kicks things up to a more ferocious level that borders on primal and it's not the driving personality to his vocals either.

On "Porcelain" they take a little more subdued approach, which spells second single to my ears. The track has that radio friendly quality to it but also have a deep heavy somber feel that keeps it in character with the rest of the disc. The chorus has that big rock sound that should attract more mainstream listeners but not turn off those who opted for the groups heavier side.

But it's "Clear Plastic" that makes for the most logical single. The song mixes the Lit type choruses countered with industrial and even at times borders on the qualities of The Clash vocally. Honestly, if it wasn't for the industrial elements, I might have mistaken this song for Lit when they were having a good day back before they signed to RCA and sold out.

"Spaceman" is a more straight ahead rocker with stylish yet intensely heavy guitar riffs and verses that land the song firmly in the 90's metal category but the choruses have a more alternative feel.

After taking a short departure with the previous three tracks, the group drops back into the NIN meets RATM arena with "First Day Of Nowhere", a song that's propelled by bone crunching guitars that give it a White Zombie meets Rage feel. Of course, Edgy's vocals are from a totally different place than Rob Zombie. "Haunted" is another heavy tune but the vocal melodies take on a sing-song quality that build up to a climatic delivery in the choruses. It's one of the most powerful songs on the CD without even trying to be.

Finally, the disc concludes with the song that caught my attention in the first place, "Psychosexy", now listening to it again, I can see where some got the Marilyn Manson comparisons but to me the song still sounds more like Rage meets Nine Inch Nails with a chorus that just won't stop. Sinisstar employees more complex structures and dynamics than Manson, landing them closer to Rezner with an experimental feel that still delivers the rock.

What's the final conclusion here? Well, you can judge by the fact that they are artist of the month that in my humble opinion these guys have the makings of a true contender in the hard rock world. These days you hear a lot of heavy bands that are pretty limited as musicians and songwriters and stick to a pretty small musical canvas, Sinisstar does not fall into that category. They take some of the best elements of heavy rock from the past ten years, combine it and take it to the next logical level. "Future Shock" is an electrifying mix of power and melody, crunch and screams, dark charm and headbanging intensity that should leave most screaming for more.

Were they worth the seven-figure deal? After listening to "Future Shock" I can tell you this album has the potential to be a monster and really shake things up a bit in an otherwise stagnant popular hard rock scene. Will the cards play out the way they should with these guys jumping to the front of the line? Time will tell, but they definitely deserve any success they achieve. I've waited patiently for two years to hear this album and wasn't disappointed. The long wait and anticipation might have built up my expectations quite a bit but Sinisstar delivered on their promise and more! 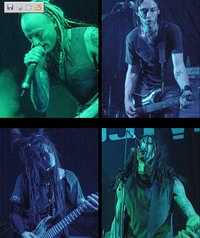