Simone White is an American singer-songwriter.

White moved to NYC from London in 2000 where she began to play music onstage. She recorded her first album with producer David Domanich and musician and friend Frank Bango. White released the album, The Sincere Recording Company Presents, in 2003 on Bango's label The Sincere Recording Company. White's albums frequently include covers of songs originally recorded by Frank Bango. Such recordings include Roses Are Not Red, Wrong About You, Worm Was Wood and Bunny In A Bunnysuit.

I Am The Man, her second album, was recorded with producer Mark Nevers, (Lambchop/Calexico/Will Oldham/Silver Jews), in Nashville, Tennessee. In 2006 she was signed to the UK label Honest Jons. I Am The Man was released by Honest Jons/EMI in the UK, Japan, Italy and Holland in 2007 and released in France, Germany and the United States in 2008 through distributors Indigo and Forced Exposure. The album was a favourite with critics from MOJO [“not just a pretty voice but a mesmerizing intelligence… a summer soundtrack of charm and beguiling depths” ****] and Q Magazine ["...a feel of the rarest kind." ****] to the Daily Mail [“a vibrant new talent”].

'The Beep Beep Song', one of the songs from White's second album I Am The Man was used in an Audi R8 advert in the UK, France, Italy, the Netherlands, Poland, Estonia, Latvia, Lithuania, South Africa, Sweden and was shown in the half time ad break of the Rugby World Cup Final of 2007.

From 2007 to 2009 White toured in the United Kingdom, Europe and Japan headlining and supporting various bands: Nouvelle Vague, Alela Diane, Teitur, Stephen Fretwell, Little Dragon, Victoria Williams and Shugo Tokumaru. In 2008 she played at the festivals Greenman and WOMAD in the UK.

On 12 June 2009, White's third album, Yakiimo was released digitally, with a physical release following on 22 June 2009. This album was again released through Honest Jons in the UK.

In 2010 and 2011 White opened for Andrew Bird and provided backing vocals for shows at the Largo (Los Angeles) and the Rio (Santa Cruz).

'Bunny In A Bunnysuit', from the album Yakiimo, was used in the Omega Ladymatic watch ad campaign, featuring Nicole Kidman.

White's fourth album, Silver Silver, due to be released in 2011, is a collaboration with the producers from Fol Chen. 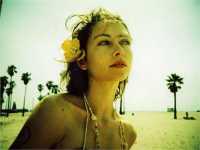