The image you certainly won’t forget: seven equally energetic bodies swarming the stage like a multitude of angry bees, on the prowl to win over their unsuspecting prey - the audience. There are guitars propelling, hips shaking, and a key-tar…yes, we said “key-tar” to reel them in. Their signature red and black ensembles only add to their dynamic show. And the audience reels…shaking their hips back to the monstrous beats, and clapping along with utter exuberance. It’s no wonder with consistent performances like this that there is a flurry of buzz surrounding the debut release of Showbread. Recorded with acclaimed producer Sylvia Massy (Tool, Johnny Cash), 13 tracks of non-stop spazz rock have never looked or sounded so good! Look for, “No Sir, Nihilsm Is Not Practical,” out October 19th! 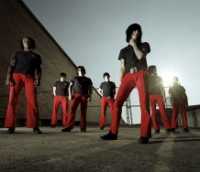