Shola Ama is Britain's most successful solo female R'n'B singer to date. Her debut album has sold over 1 Million copies and spurned the top five singles "You Might Need Somebody" and "You're the one I Love" to name a few. She was also the proud winner of the Brit Award for Best Female Solo Artist (also receiving a nomination for best newcomer), the crowning achievement in an incredible year.

The culmination of this critical and commercial success resulted in Shola collecting two MOBO awards for Best R'n'B act and Best Newcomer. In addition she received two further nominations for Best Single ("You Might Need Somebody") and for Best Album ("Much Love").

Throughout 1997 she toured extensively across the U.K as a special guest of the Fugees, performed at Jamiroquai's Jam in the park and headlined the 1998 Rhythm Nation tour (which also featured D-Influence, Rashaan Patterson and Glamma Kid).

In 1999 she released her sophomore effort, the critically acclaimed album "In Return". She co-wrote the majority of the new material on the album. In the process she worked with a host of international producers and writers including Darkchild, Stargate, Bradley Spalter, Ali Shaheed Muhammad and Angie Stone, Babyface, Shaun Labelle and D-Influence Productions.

Shola soon started touring again and did a sell out U.K club tour which took her, and her band all around the country. Shola's single "Still Believe" spent an amazing four months in the French radio chart and last summer she toured France extensively, playing to an average of 28.000 people every night. She also played at fully packed venues in Germany, Switzerland, and Italy.

Shola's second single "Imagine", lifted from her "In Return" album was released last summer and was written by Shola and The Jerkins brothers. It features a garage mix by Club Asylum, which had the clubbers dancing all year. The remix video was shot in club land Ibiza and features MC Onyx Stone.

She also did a spectacular millenium show, in front an audience of 6000, on the beautiful island of Djerba in Tunisia. This New Years extravaganza was also televised throughout Tunisia and France, and received rave reviews from the press as well as the punters.

As well as writing for other acts such as Warren Stacey (Popstar signed to Def Jam), Shola has recently finished collaborations with Robbie Craig (Artful Dodger), with whom she has recorded the beautiful duet "I'm Yours" and "Nin Kadi" with Guinean World Music Artist Mory Kante. She has also recorded the forthcoming single "Amazing Love / Feels So Good" with the B15 Project, which features Lady Dynamite, and is set for a late October release.

Currently in the studio writing tracks for her forthcoming album project, tentatively titled "My Future". It features productions from D-Influence Productions, Curtis Lynch JR, Copenhaniaks, BJ & Mike Soul, SPA and The Ignorants. Shola is also heavily in demand on the PA circuit with both R'n'B and Garage PA's, and are doing shows across England, Europe and Africa. 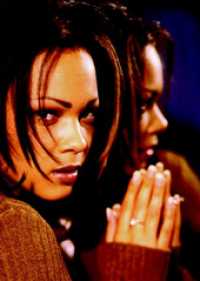