Shakira, the graceful one, has been sneaking up on you-the Grammys, the MTV Video Awards, those Pepsi spots. She's a child prodigy who wrote her first song at age eight, a blond-locked Colombian who speaks three languages and loves only in Spanish. She's a perfectionist who spends hours in the studio; she needs to be close to nature but her passion is the crackle of electric guitars. She is in the blush of youth, but she's far older than her 24 years. As her countryman, Nobel Prize winning author Gabriel Garcia Marquez wrote, "Shakira's music has a personal stamp that doesn't look like anyone else's and no one can sing or dance like her, at whatever age, with such an innocent sensuality, one that seems to be of her own invention."

The swift ascent of Shakira's star is the stuff of Latin American legend. At the age of 13, she signed her first recording contract with Sony Music Colombia and released her first album Magia. (Magic). After graduating from secondary school, Shakira decided to dedicate her life to the music, recording Peligro ("Danger") and Pies Descalzos, ("Barefeet") in the years that followed, which broke her in Latin America , Brazil (over one million sales) and Spain.

Her next album, ?Dónde Están Los Ladrones? produced by Shakira and executive produced by Emilio Estefan, established her as the major force behind Latin pop-rock, going multi-platinum in the U.S., Argentina, Colombia, Chile, Central America, Mexico and platinum in Spain. Then came a Grammy and two Latin Grammys, the key TV appearances, the brave new world of Shakira, the star. Shakira is a walking, living, breathing, singing contradiction. "I was born and raised in Colombia, but I listened to bands like Led Zeppelin, the Cure, the Police, the Beatles and Nirvana," said Shakira. "I was so in love with that rock sound but at the same time because my father is of l00% Lebanese descent, I am devoted to Arabic tastes and sounds. Somehow I'm a fusion of all of those passions and my music is a fusion of elements that I can make coexist in the same place, in one song."

It's the songs that make her new album, LAUNDRY SERVICE, her first with English-language tunes, the kind of breakthrough work that will turn the pop world on its head. From the tango-inflected "Objection (Tango)," to the Middle Eastern flavor of "Eyes Like Yours," to the lyrical innovations of "Underneath Your Clothes", to the richness of the melodies of "The One," to the pop-rock of "Whenever Wherever," Shakira will stand in the ranks of the best singer-songwriters in any language.

"I think I am celebrating life more than ever," said Shakira. "I had a slightly narrow vision of love. Now I am feeling unguarded, and it feels great. I feel washed clean of the way I looked at things in the past, which is why I am calling the album LAUNDRY SERVICE."

The most extraordinary thing about LAUNDRY SERVICE is the way she was able to translate her Latin American sensibility into a new language. The idea to do songs in English first came up during Shakira's partnership with Emilio and Gloria Estefan. Gloria initiated the process by translating "Ojos Así," a song that appeared on Shakira's last album, Dónde Están Los Ladrones? (Where are the Thieves?). "I wanted to have her involved in this somehow because she was one of the people that really believed that I could make a record in English," said Shakira.

But nurturing the belief that she could write songs in English was a strong challenge. "The first song I wrote by myself for this record was "Objection," remembered Shakira. "I prayed and asked God to send me a good song today, and I remember I started writing the song a couple of hours after. I wrote the music and lyrics at the same time, and when that happens it's really magical to me." When she completed "Objection," she knew that she could write ten more, so she packed up her loved ones and set up portable studios in rural Uruguay. Taking in the primordial energy of natural surroundings, Shakira came up with a crop of new songs more introspective, more passionate than any she had written before. "I had to find a way to express my ideas and my feelings, my day to day stories in English. So I bought a couple of rhyming dictionaries, read poetry, and authors like Leonard Cohen and Walt Whitman," she said.

"I would feel love in Spanish but I would think about how to express that love in English. Afterwards that became such a natural process, and if you check the subject of my songs, most of them talk about my own experiences and feelings and what I was actually going through in my life," said Shakira. "Is impossible not to write about love.. It's the great mystery of life. It makes me ask myself new questions every day."

Shakira is one of the poetic songwriters of her generation and considered the best female lyricist in Latin America: On the ballad "Underneath Your Clothes," she claims as territory a man she likens to "a song written by the hands of God"; on the blues-rocker "Fool" her "tears make a sea of desert." But she is still as quirky around the edges as she's always been-on "Ready for the Good Times" she remembers close encounters with roaches; on "Poem to a Horse" she scolds a friend dulled by "hydroponic pot," and on "The One," she rewards her true love by shaving her legs and learning how to cook.

"I try to represent only myself, but there are many women that identify with me," said Shakira. "I am definitely not a woman who washes her husband's clothes every day. I hope I don't sound like a feminist leader saying these things. I just try to be honest the way I write."

There's no doubt that Shakira has maintained her creative integrity with her new project. But perhaps more importantly, LAUNDRY SERVICE is a record that reflects her deep love for the basics of rock production. "I felt that I needed to make an organic record with real players in the studio playing live music and doing it like they made records 30 years ago, in the old times," said Shakira. "We used an engineer named Terry Manning, who's worked with ACDC, Led Zeppelin, Lenny Kravitz. He's somebody from the old school. I was determined not to depend on too many electronic sounds, and he definitely understood that."

On LAUNDRY SERVICE there is a very strong dedication to old-fashioned rock riffs, to the soulful, bluesy singing styles of a Bonnie Raitt, even the mournful, wailing guitars of Aerosmith. But Shakira can't help being herself, and that means that "Whenever Wherever," will bounce along with some help from Andean pan flutes and Brazilian drums, and "Eyes Like Yours" bursts from your CD player with navel-baring, belly-dancing furor. And for those longing for Shakira in her original language, four new tracks in Spanish are included. "The world has become so small and music is so eclectic now, and our taste is so broad that that's almost predictable that all this crossover from one culture to another was going to happen," she said, then paused for a second, making sure everyone knew she had her priorities straight. "But I know that rock and roll is never going to die." 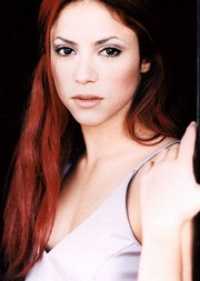