Unbelievable! When you look at this young and charming 6-footer, you could hardly imagine that you've got a genuine star in front of you. But that's exactly what this very sympathetic singer with the dreamy blue eyes and shy smile is - a superstar!

SASHA is perhaps the most loved popstar in Germany today, and not only in Germany but as well all over Europe where hundreds of thousands of fans have in the meantime fallen for him. His fame reaches all the way to Asia and America.

SASHA was born on 5 January 1974 and is therefore a Capricorn. His ancestors were showmen and passed on, as it were, their talents and their desire to travel to him right at birth. Even as a child he would grab a broom handle and imitate Elvis Presley in front of a mirror, or plunk away on the organ his uncle had at home. In school he started his first band, "Bad To The Bone", which "was exactly as bad as the name suggests", he says today laughing and not a little ashamed.

Although SASHA has since become an artist loved by many, he thinks about his childhood with pleasure, and his family really means a lot to him: "My family is important to me. When I get really exhausted, I know who can really cheer me up. At home I can renew the strength I need to stay on top of things, both the stage and the music business."

The other pillars in life are his friends. "These days I have very little time for my friends, but I spend every free minute I have with them. We go see a movie or play soccer together." And to the question whether all the commotion around him goes to his head, he can only laugh: "My friends save me from that. They always bring me right back to earth if I get too caught up in it."

HOW IT ALL STARTED

SASHAs first real band was called "Junk Food", modelled on bands like Nirvana and the Red Hot Chili Peppers. Though it's true they never had a record contract, they played live all over their area and this was a perfect opportunity for SASHA to really acquaint himself with the musician's experience. Meanwhile SASHA did some busking with his friend Benedict. They did so well that the pair even earned some money doing it. And that's where SASHA discovered his talent as entertainer.

In 1992, "Junk Food" won a contest which entitled them to a few days in the "Click Music" Studio to make a demo tape. Although success didn't follow, since the band broke up shortly thereafter, it was nevertheless an important event in SASHAs life. For in the studio SASHA was to meet the producers Grant Michael B. and Pomez Di Lorenzo for the first time, who recognized the talent that was in him. And here begins the fairy tale in which SASHA developed from a background singer into the most beloved dream prince of the pop music scene.

FROM BACKGROUND SINGER TO SOLO STAR

Firstly he had to go through the school of hard knocks which is everyday life of the studio. SASHA earned his money as background singer for "The Wolf" and others. Studio work as background singer means lots of toil and no fame - but all that was soon to change. One day SASHA came into the studio and met a beautiful and charming female singer from Mali called Young Deenay. On her first single, "Walk On By", he was only the second voice. The song became a megahit and more and more people began to wonder who was the owner of that fantastic other voice. Naturally it was none else than SASHA.

On Young Deenays second single, "I Wanna Be Your Lover", SASHA had a real solo part in the refrain and was afterwards recognized as Young Deenay's singing partner. He was also in the video and the pair even went on tour together. Fan letters started piling up, the phone was ringing off the hook, and one thing was clear: SASHA had the stuff for a solo career. And it didn't take much time till SASHAs first single came out, "I'm Still Waitin'", on which Young Deenay was his singing partner. The song shot immediatelly into all the hit lists.

After that, things happened in rapid succession. After "I'm Still Waitin'" came the single "If You Believe" which went to number 3 in the charts and in Germany alone sold over 750,000 copies. The fans loved SASHA immediatelly and suddenly all the newspapers were full of him. When his first album, "Dedicated To..." came out in the Fall of 1998, everyone was pleasently surprised. SASHA wasn't just another pop star, nor was he a one-hit wonder, but rather proved with his 12 songs that he was a class singer who could perfectly handle happy and light as well as sad and serious songs.

The song "We Can Leave The World" which was relased as his next single, showed to advantage the soul qualities of SASHAs voice with the backing of an entire gospel choir as well as an orchestra of 20 to accompany him. The song promptly became his next hit, and everyone has surely seen the melancholy video in which SASHA tracks alone through the desert until he is picked up by a passing motorcycle driver.

In the end the album "Dedicated To..." sold a few hundred thousand copies and immediatelly landed high in the charts. And as fas as SASHAs fans are concerned, age seems to play no roll at all. Whether 7 or 70 years of age, SASHA makes music for the heart, music which everyone can understand and which has a little something for everybody. SASHA, however, is far from letting all this go to his head or from becoming arrogant. He knows exactly who he has to thank for his success: his fans.

And they are not only in Germany, but all over the world. Whether in Austria, Switzerland, the Benelux countries, Sweden, Demark, Norway, the Czech Republic, Hungary, Portugal, Italy or Finland, SASHA is on everyone's tongue and can be happy about platinum and gold honors all over Europe. His reputation has already reached distant Asia where in Japan, Korea, Thailand, Malaysia and other countries the fans are scrambling for his autograph and the opportunity to experience him close up. In the fall, SASHA is even going to release his album in America where they already impatiently waiting.

SASHAs current single is called "I Feel Lonely", and in the summer of 1999, whoever switched on ZDF, the state-run TV channel, could hardly have avoided hearing the song. The station picked up the summer hit immediately and used it as the title song for their vacation program all summer long. Equally successful was SASHAs appearance in March on Thomas Gottschalk's show Wetten, dass...Only rarely does such a young star have the opportunity to appear on such an important show.

In September, SASHA will start out on his first big live tour. On hand will be a real band to accompany him, with a female chorus, drummer, guitar, bass, keyboards, the whole ball of wax. On stage, SASHA is unbeatable, his charm and charisma keep his fans excited, something SASHA in turn spurs on by giving his all. He himself awaits the tour with great expectations. "I'm looking forward to going on tour with a longer set.

What I love about live appearances is simply standing in front of the audience and getting the feel of the fans. You have to be as good as you possibly can but not absolutely and totally perfect. It's much more important to create a mood and to find access to the audience. You can only expect back what you're ready to give." On the stage he's a genuine entertainer, one who obviously has fun singing for his fans. In his audience you'll find fans of every age and all of them feel one thing together: SASHA sings for us all. And this is perhaps why SASHA won the VIVA Comet as "Best Newcomer National" - because his Fans are loyal to him.

It was only a year ago that SASHA emerged into the pop music scene and already he's among the most popular and well-known singers. And no wonder, because SASHA is not only a fantastic singer, he's also a super sympathetic guy, one who is game for just about anything. 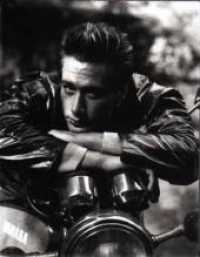