Sarah Asher Geronimo was born on July 25, 1988 to
Father Delfin Geronimo, a retired PLDT employee, and
mother Divina, who used to run a beauty parlor in
their house at Sta. Cruz, Manila. Sarah is the third
of four children with siblings Johna Rizzie, Sunshine
Grace, and Ezekiel Gabriel.

Sarah's first music lessons came from her father. He
would have her practice everyday to develop her
singing prowess. Sarah first sang on stage at age two
at a mall show. Sarah sang "Pasko Na Naman" with
Pinky Marquez and Richard Reynoso. At four years old,
mother Divine would accompany her to auditions for
different TV programs. Sarah became part of kiddie
shows Pen-pen de Sarapen (4-6 years old), Ang TV (7-8
years old), and NEXT (8-9 years old). In between
auditions, Sarah would perform at shopping malls and
hotel lounges. She was one of the performers during
the 1995 visit of Pope John Paul II. Sarah at an
early age joined hosts of different singing contests
the first of which was Tuklas Talino sponsored by the
Philippine Long Distance Telephone Company (PLDT).

Star For A Night hosted by Ms. Regine Velasquez was
arguably the singing contest that catapulted Sarah to
stardom. On March 1, 2003, at age fourteen Sarah
emerged as the grand prize winner of the said singing
competition with her rendition of the song "To Love
You More." She won P 1 million and a managerial
contract at Viva Artist Agency. The prize money was
spent on tuition fees and the operation of her eldest
sister.

After this turning point what followed are albums,
concerts, her own soap opera, a mainstay at ASAP (a
Sunday variety show), supporting roles in movies,
endorsements, and legions of fans. She became a
popstar, a teen princess, a role model.

When not busy being a popstar, Sarah spends time with
her family, they go to Sunday mass. Sarah enjoys
reading J. K. Rowling's Harry Potter, and plays video
games. 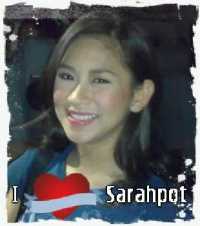