Santi White (born September 25, 1976), better known by her stage name Santigold (formerly Santogold), is an American songwriter, producer, and singer. Her debut album Santogold was released to glowing reviews in 2008. A new album is announced for Spring 2012.

Her initial singles "Creator" and "L.E.S. Artistes" received attention from Internet media in 2007.

Her debut album, Santogold, was issued in April 2008. It was conceived with fellow Stiffed member John Hill. The record featured appearances and production work from Chuck Treece, Diplo and Switch amongst others. Santogold was hailed by both Entertainment Weekly and Spin."L.E.S. Artistes" was placed at number two on Rolling Stone's Singles of the Year, while Santogold was sixth on their albums of the year list. "Creator", along with "Lights Out", appeared in commercials in the United States and in the United Kingdom.

During the summer, the singer released on CD a mixtape called Top Ranking: A Diplo Dub which was well received by Pitchfork. and NME.

In February 2009, White announced that she changed her initial stage name to Santigold for reasons related to a possible lawsuit from director Santo Victor Rigatuso, who produced the movie Santo Gold's Blood Circus.

Her performance in May 2009 at the Sasquatch! Music Festival was highlighted by a viral video in which a man dancing to her music inspired a large crowd to join him.

In 2011, Santi published the song "Go!" which featured Karen O of the Yeah Yeah Yeahs. The track was produced by Switch, Q-Tip and Santigold herself. NME praised it as a "brittle and brilliant brawler of a track" with "great reverberating militaristic kettle-drum booms". Santi announced that the follow-up of Santogold would be out this fall. Talking to Billboard, she described her forthcoming album as "sonically eclectic but with some epic curveballs thrown into the mix".

Santigold has been announced as an opening act for first dates on the U.S. leg of the Red Hot Chili Peppers 2012 I'm with You tour. 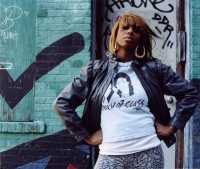