Memphis. It's a place where music isn't just played; it's created. From that legacy comes Saliva. On the quintet's 12-song Island debut, Every Six Seconds, Saliva bring the sturm und drang of hard rock together with hip-hop, grunge and sheer, unbridled mayhem, while still preserving the spirit and soulful intensity of its forebears. Every Six Seconds, the name chosen by frontman Josey Scott because "life cycles seem to happen every six seconds," is the sound of tradition beginning a new cycle and forging on into the 21st century.

“We were all after the same thing -- I can say that,” says Scott, a fourth-generation musician who, like most of the members of Saliva, had established himself through years of service in the Memphis music scene before forming the band. “We were after something really undeniable, sort of heavy and melodic. We were all in these bands that were not getting our rocks off stylistically; we really wanted to build great songs.”

“I think the main thing with us is the chemistry,” guitarist Chris Dabaldo says, explaining where the intensity and conviction in Saliva's music comes from. “We're a bunch of guys that love each other's company. And we are committed to making great music.”

On first listen to Every Six Seconds, it's easy to be enveloped by the crunchy, chugging riffs on opening track “Superstar,” the rap tinges on "Doperide,” or the sheer brutality on “Click Click Boom” and “Beg.” Repeated listens will reveal unrepentant popcraft, as evidenced by the hopeful yet defiantly anti-sentimental “Hollywood,” and the anthemic first single “Your Disease.” It's obvious that Saliva, with rock aggression, hasn't forsaken the importance of a well-crafted song.

Sharing an ambition that wasn't equaled by the people they'd been working
with, Scott and Dabaldo, who came as a matched set, formed Saliva in September of 1996. “We were trying to find an opportunity to do something that we were both really to be pleased with and where there weren't any egos involved,” Scott says. “We had our eyes on something bigger.”

“Something bigger” involved guitarist Wayne Swinny, who recalls his first meeting with Scott: “I couldn't believe what came out of this guy. The beauty is that for all of his ability to rap and his hard-edge and his look -- he looks really aggressive and scary, almost -- when I saw him sit down with an acoustic and play this beautiful, melodic stuff with great hooks and melodies and incredible vocals, that really did it for me. I knew this was a band that could so something really special.”

Completed with the additions of drummer Paul Crosby and bassist Dave Novotny, Saliva -- literally and figuratively -- became, according to Scott, “the glue that bonds things together.”

Within the first few months of its formation, the fledgling group entered a Grammy Showcase competition sponsored by the National Academy of Recording Arts & Sciences. Despite being an unknown act at the time, Saliva -- which was among those chosen from 6,000 entries nationwide -- won the Memphis competition in January 1997 and then came out victorious in the semifinals, which were held in Austin, Texas the following month. Next came the nationals in New York City, where the band were finalists. “We want the world every time we go out to do something,” says Scott. The band was thrilled that it had come from nowhere to make its mark.

The group chose not to rush into a deal, however, putting out a self-titled debut independently that sold some 10,000 copies on a regional basis. After signing with Island, Saliva hooked up with producer Bob Marlette -- whom Scott refers to as “the heavy metal guru” -- for two months of recording at A&M Studios in Hollywood.

The recent inclusion of the band on the Dracula 2000 soundtrack alongside Slayer, Pantera, Monster Magnet, and Powerman 5000, announces Saliva's arrival.

Musically, Saliva may seem a million miles from Memphis, but like Elvis, the band has forged a sound that's “all shook up.” 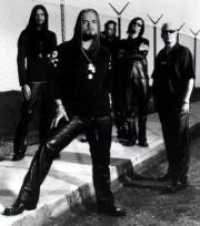