Pop music has exploded in an edgy, sexy, supremely tuneful commotion thanks to the uncommonly brilliant sounds of the Scissor Sisters.

Creative sparks first ignited five years ago, when a then 19-year-old explosion of energy called Jake Shears was introduced to a multi-instrumentalist who goes by the title of Babydaddy. Fired up by a passion for solid songwriting and off-the-wall humour, they joined forces to write hook-studded tunes, adopted NYC as their home and agreed on a cheeky name that’s caused confusion and provoked many blushes in turn. “None of us are lesbians, though” says Scissor Sisters, helpfully.

Sex, inevitably, plays a significant part in the music. After all, Jake discovered a knack for performance during his stint as a go-go dancer, to raise funds for a European college trip. “I’m so grateful that I went through that phase of dancing on bars for dollars!” he says. “It made me totally unashamed to go crazy. Once you’ve taken your clothes off in front of hundreds of people, things get a lot easier.”

Shameless? Absolutely, and infectiously essential, too. Scissor Sisters bring together rollicking guitar riffs, throbbing synths and a whole bunch of wicked lyrics. Their influences skitter through glimmers of vintage Bowie, Roxy Music, and Elton john to Giorgio Moroder, burlesque theatre and rock opera. At college, Jake had majored in Fiction Writing and numbers like the catch glam rockin’ groove of the their major-label single ‘Laura’ (I gotta give myself one more chance/To be the man that I know I am) weave feature-length stories through song. Sometimes, it sounds like they’re partying hard on cheap champagne; at other points, the moods are downtempo, and beautifully, surprisingly wistful: radio-friendly soundtracks for the morning after.

Music this sparky calls for suckerpunch live presence to match, and before they were honing their studio skills, Scissor sisters were whipping up a storm with their shows: on home turf at first, and more recently extending to Europe (in Barcelona not long ago, one impressed spectator described them as ‘a life-changing experience’).

It was on the New York live circuit that the original duo teamed up with a third full-time Scissor Sister: performance artist Ana Matronic. “She’s tough, amazing, glamorous…” the boys enthuse. The hostess of a decadent cabaret show in the Lower East Side who’d learned her magic on the San Francisco scene (“At 20, I realized I’m a drag queen stuck in a woman’s body!” she laughs) she first met Jake at a Halloween party, where she’d dressed as a Warhol Factory reject, and he was in the guise of, erm ‘a back-alley abortion’. She recalls: “We both took one look at each other and thought” “hey you’re cool!”

Scissor Sisters actually made their live debut appearance at Ana’s club in late 2001, and now the stately lady is a fixture at their dates (where the trio are joined by charismatic friends Del Marquis on guitar and Patrick Seacor on drums), and lends her own crisp tones to record. Ana neatly sums up the outfit’s stance: “What we do is about people displaying their fantasies on the outside, trying to break out of the every day, and look like their dreams.”

There’s no denying that they’ve encouraged a great deal of audience interaction too, which has already included a 75-year-old fan at one show. “when it’s 430am and you’ve got grandma on stage partying with you, you know something works” laughs Jake.

It’s little wonder that The Village Voice lauded Scissor Sisters as ‘a rock unti who aren’t afraid to play disco; another surefire highlight of their repertoire has them reworking Pink Floyd’s prog rock rehab classic ‘Comfortably Numb’ into a full-blown bootylicious anthem, with Jake skillfully providing Bee-Gees styled vocals (“I’ve always loved singing in falsetto”) and a ‘Frankie Says Relax’ retro twist. Perhaps the fusion shouldn’t work, but the genuinely make the song their own, with massive glitterball panache.

“I don’t think we’re afraid to play anything” adds Jake. “Pop should be meaningful again. It shouldn’t be a dirty word. We’re not making fun of anything we do and there’s no way we’re going to sound manufactured. Our songs are accessible enough to break through barriers. Actually, we’ve been meaning to write some country music…” Before they go down that particular road for real (anything’s possible, as Jake regards songwriting as ‘divine intervention.), Babydaddy points out “Of course we love the dancefloor, but a nice mélange of influences is always going to take you someplace new. From the very beginning we were saying: “Let’s make this large than life.”

And so it is. With three unmistakably individual and attitude-packed New Yorkers at the core (Jake: “ I would have never got together with this group of people in any other place”; “Babydaddy: ”We do what we want without compromising”), Scissor Sisters’ mission to inject fun and frisson back into culture has just gotta be big. Cutting edge has never sounded more irresistibly decadent. 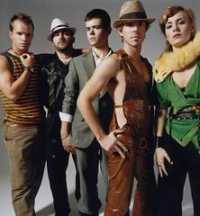