RYTHEM's talents as singer/songwriters, with flowing melodies and harmonies, began to shine as they worked with their own original tune Hitoritabi SHARARURAN in the Sony Music Audition. In May 2003, RYTHEM's first single HARMONIA was released and was used as the second ending theme song for hit TV TOKYO anime series, Naruto. Following the successful release of their debut single, 4 more singles and the debut album, Utatane were released before Hōki Gumo was released in early 2005 as a single for the first opening theme of yet another hit TV TOKYO anime series, Yakitate!! Japan. The 8th single, 20 Tsubu no Kokoro was a collection of tunes written and performed each by YUI and YUKA dedicated to each other. The 9th single, Kokoro Bīdama was used as the 6th and final ending theme song of Yakitate!! Japan, rounding up their involvement with that anime series. The 10th single will be titled Negai and will be used as the ending theme of Nippon TV show, スッキリ. RYTHEM's 2nd album and coinciding DVD was released in May and June 2006, respectively compiling their works, post-UTATANE as well as including some full length versions of short pieces which were performed on their weekly radio show, "Enjoy Your Time!". Busily promoting new up and coming talent, RYTHEM then headed out in late 2006 to perform a series of live concerts entitled "Acoustic PoP". With their busy schedule on the road RYTHEM managed to pull out one single in time for the Spring season and the plentiful visual sights of cherry blossoms, their aptly named release was Sakura Uta (or 'song of the cherry blossoms') in early 2007. As well as being a tie-in for the anime series, Deltora Quest's 1st ending theme, this single also marked the beginning of the "Third Stage" or RYTHEM's venture into the music arena and as Summer quickly dawns, a 12th single has been announced to reflect the atmosphere of the season once again - Hotarubi or 'firefly'. Hotarubi was initially scheduled for release in August 2006, but was postponed for further tweaking in the areas of lyrics and arrangement.

taken from wikipedia, lyrics from cherryblossom-garden.com 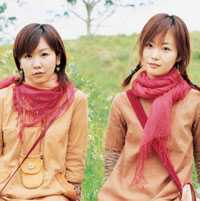