Roxette, Sweden's first pop export of the 90's with the striking image and catchy blend of pop and rock, consist of Marie Fredriksson (born 30 May 1958 Sweden) and Per Gessle (born 12 January 1959, Halmstad, Sweden). Gessle became a solo star in the early 80s having previously played in the new wave band Gyllene Tider. He was 'discovered' by former Abba manager Thomas Johannson who was looking for songs for a Frida album. Meanwhile Fredriksson was playing on the singer/songwriter circuit. Johansson teamed them up in 1985 and they became Roxette. Recording at Gessle's studio in Halmstad they soon conquered Sweden and broke through in the USA thanks to the inclusion of the ballad, 'It Must Have Been Love', which was used on the soundtrack of the film Pretty Woman .

Roxette's history started from a song: "Svarta Glas", written by Per. He asked a Swedish singer to record it, but she refused. Then Per made an English version for it, "Neverending Love", and Rolf Nygren, from EMI, suggested Per to perform it himself together with Marie (they had already met many times before, since 1977, and Marie sang with Per for the first time in 1981, for Gyllene Tider). And she accepted! "Neverending Love" single was a hit in Sweden.

Roxette got its name from a 70's song by Dr. Feelgood, one of Per's favorite bands.

In 1986, Roxette released their first album in Sweden: "Pearls Of Passion", and in 1987 they started a tour (The Rock Runt Riket Tour) around the country. Roxette, with Ratata and Eva Dahlgren (Swedish artists) performed live for more than 110,000 people.

In 1988, the album "Look Sharp!" was released in Sweden. In that year something very strange happened: an exchange student from the United States enjoyed their music and took a copy of the album with him to America. Then he took it to the biggest radio station in Minneapolis, KWB, and told the program director Brian Phillips , 'You have to listen to this album because it's great'. Soon "The Look" went up to #1 before the album was officially released worldwide (what happened in 1989).

In late 1989 Roxette reached #1 again with "Listen To Your Heart" and began their first European tour. "Look Sharp!" sold 8 million copies around the world.

Roxette's third album "Joyride" was released in 1991, named after a comment made by Paul McCartney (he said that writing songs with John Lennon was a long joyride). The album sold 10 million units and the hit "Joyride" reached #1 in many countries. Other successful songs in the album are "Spending My Time" and "Fading Like A Flower (Every Time You Leave)".

So they started a world tour. During the "Join The Joyride" tour (108 concerts around the world in more than 87 countries, including even Russia and China) they made an album, "Tourism - Songs from studios, stages, hotel rooms & other strange places", recorded in many countries, like Sweden, Brazil, Argentina, Australia, Chile, Switzerland and USA. Released in 1992, "Tourism" sold about 7 million albums.

In 1993, Per wrote a song, "Almost Unreal" for a Bette Midler movie, but it ended up in the "Super Mario Bros." sound track, which also had another Roxette song, "2 Cinnamon Street" (a kind of ‘female version’ of "Cinnamon Street", from the "Tourism" album). "Almost Unreal" is a very beautiful song, although the movie is not so good...

In 1994 Roxette released a new album "Crash! Boom! Bang!", which has sold around 5 million copies, and started another world tour. But in this tour they didn’t go to USA because the local EMI thought it wouldn’t be successful. EMI USA released the album "Favorites From Crash! Boom! Bang!", sold only in the McDonald’s fast food restaurants, which sold about 1 million copies.

In 1995 EMI released "Rarities" in some few countries with some demos and some MTV Unplugged versions. "Rarities" is now out of print. In October Roxette released "Don’t Bore Us - Get To The Chorus! Roxette’s Greatest Hits" which contained 14 greatest hits and 4 new ones.

In early 1996 Roxette released "Baladas En Espanol" with some of their best ballads recorded in Spanish.

In 1997 Per and Marie signed their contract with EMI for the next 10 years. Still in 1997, EMI re-released "Pearls Of Passion", which was released only in Sweden in 1986. It contains the original 12 tracks and 8 extra tracks.

In early 1998, after four years out of studio, Roxette went to Spain to record some songs for the new album, "Have A Nice Day, which was released in early 1999.

And Per said they are already preparing a new one. It will be released on the January of 2001…

In 2001 A Surpise single was released called "The Centre of the Heart". Most people had no idea Roxette was still around so only the fans knew about it. June of 2001 the album "Room Service" was released. "The Centre of the Heart" was the second song on the album. Next came the single "Real Sugar" in which the video is a muppet-like parody of the tonight show. Next came the super ballad "Milk & Toast & Honey" which did absolutely nothing in the West but becuase Europeans have a better taste in music "M&T&H" went to #1 in various countries including Spain. That was it for Room Service.

In Early 2002 it was announced that Marie had a brain tumor which would have to be removed immediately. She quickly went through the surgery. Apparently she even wanted to go on tour right out of the hospital but Per and Mikke wouldn't let her! :-)

In Late 2002 "The Ballad Hits" was released. The limited edition two disc set included one new single (A Thing About You), four previously unreleased songs (Breathe, The Weight of the World, It Hurts & Every Day)the B-side to the "Salvation" single - "See Me" and the 13 ballads that have defined Roxette's career.

In Early 2003 Everywhere but CANADA (No I'm not bitter) "The Pop Hits" was released. The lead single was "Opportunity Nox" The first ever cartoon Roxette video. The song is still on European charts but didn't go much past 40 on the North American charts. "The Pop Hits" like "The Ballad Hits" includes 13 pop songs that have defined Roxette's career as well as 6 new ones. Opportunity Nox & Little Miss Sorrow are the only two i know becuase EMI Canada is not releasing the double disc version. 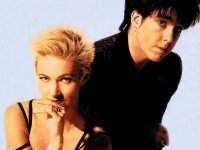