Where should I start…these stories, my music, it comes from all the places I’ve been, the people I’ve been blessed to play music along side, the way it feels to play my guitar until it bleeds or to bang on that old piano in my living room until my shoulders ache and my fingers won’t move anymore. From Georgia to New York, New York to the road; Charleston and Memphis, Vermont to Chicago. Turned 21, then 22…released my first record with The District…Maine and Boston and who knows where else…made love in the grass and meant it…walked down Wilshire, blinking in the Los Angeles sun… got lost in Delaware scrambling to get home to my family after too much time…swam in the ocean with the boys, thanking God for purple and orange Florida sunrises. Soaked up New Orleans…tried to become Levon Helm; realized I wasn’t much of a drummer……turned 23. Wrote A Drop In The Ocean with Zach Berkman and then put it away for six months because I didn’t get it…fell in love…drank whiskey from the bottle and howled at the moon…released Last Call…played the blues back-to-back with Buz in Charlotte and just about everywhere else along that godforsaken highway…the van broke down…we fixed it…the van broke down again. Got lost heading to South Carolina and ended up in Alabama…fell out of love and hit my head on the way towards the bottom…turned 24…made a Christmas album, because, damn it, I like Christmas albums. Played big rooms…played small rooms …listened to Van Morrison and cried…listened to trains scream somewhere off in the distance on ink-black sleepless nights… I traced the outline of a woman’s face on a piece of paper; someone I loved and didn’t want to forget once we’d put the whole thing to bed. The picture didn’t turn out the way I’d hoped, so I took my ink-stained fingers and spelled her name out in big, smeared letters on my arm. I guess that’s all I’ve ever really had…my words. This music is the story of where I’ve been, who I am, and where I’m going…these songs are my life. 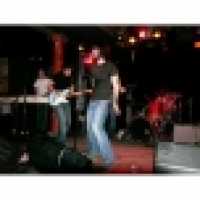