Roisin Murphy's debut solo album is to be pre-released as a series of three strictly limited edition EPs in the New Year, ahead of its more formal emergence on compact disc and long-player later in the spring. Beginning with ‘Sequins1' in the first week of January, each of these lavishly packaged, heavy-weight vinyl, 12-inch-only releases will take four of the tunes from the record and make them available at six-week intervals leading up the album's release in May.

All the tracks on the ‘Sequins' series are the results of Roisin's new fruitful collaboration with producer Matthew Herbert , who she met as a result of his remix work for her band Moloko. This is the first time the highly-revered electronic pioneer Herbert has produced an album for another artist, aside from his wife Dani Siciliano. Here the significant ground covered on ‘Sequins 1' by Roisin and Herbert indicates what to expect from the broader scope of the pair's collaboration on the forthcoming album.

“Having worked on several Moloko remixes from as early as 1996 Roisin's voice had become a familiar friend ,” says Herbert .” I had always loved the ease with which it sat in the textures of the sounds I work with. To work on her solo record struck me as the perfect place to try and mix proper musical charisma with noises not often heard on the radio.”

This first ‘Sequins' EP commences with the agenda-setting ‘Ruby Blue' , which begins with an ear-catching meld of distorted funk and Andrews Sisters harmonies. It slides around like a languid and sinuous eel, all finger-pops and syncopated handclaps, before busting out with a too-loud fuzz guitar and Roisin's provocative kitten purr. ‘Off On It' , which follows, has a percussive track that sounds like a steam train pulling slowly out of a siding, while Roisin delightfully slurs her way through a miasma of flirtatious signs and signifiers.

Third up, ‘Night Of the Dancing Flame' is like a lost classic number featuring either the elephants on parade from the Jungle Book (tremendous muted trumpet blasts) or Josephine Baker in all her Parisian glory. As it lollops along with cartoonish gait, Roisin tells more tales of sexual abandon in not entirely private places, and you realise that between them her and Herbert might have hit upon a long untapped resource of Cab Calloway-influenced pop music. It's crazy and not a little infectious.

‘Sequins 1' is completed by the magical warmth of ‘ Through Time' , which in its hazier moments approaches the gentle feel of one of the great ballads off a good Stevie Wonder record.

The ‘Sequins' EPs will also introduce another powerfully creative collaboration with the artist Simon Henwood , who has painted a number of large-scale portraits of Roisin, which are to be exhibited at the Hospital in London in March 2005*, and will be reproduced one at a time as the sleeves to ‘Sequins 1 – 3'. 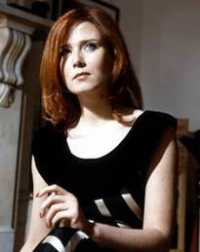