Roch Voisine was born on March 26, 1963 in Edmundston, Canada. Roch started his career playing hockey. Unfortunately, at 17, he gave up after an accident. He turned to music, writing songs & playing guitar then recorded his own songs with friends. A Canadian DJ, Paul Vincent, became Roch's manager. Roch Voisine released his first album Sweet Songs & performed in front of 50,000 people on Canada's national day. His second album Roch Voisine followed in 1987. The young singer was the host of "Top Jeunesse" on television. In 1989, he played Dany Ross in the TV series "Cogne Et Gagne".
Roch Voisine got successful in 1989 with the song "Hélène" & the album, named like the song, sold 3 million copies. In 1992, before his third tour in France, Roch got the distinction "Chevalier Des Arts Et Des Lettres". In 1993, his wax statue appeared in Musée Grévin. The Canadian singer continued his career but wasn't succesful : Chaque Feu was released in 1999 & Roch Voisine in 2001. In 2002, he released an album in English, Higher. Between pop/rock & ballads, this album was dedicated to a young Canadian woman, Myriam Saint-Jean. Roch married her on December 21. 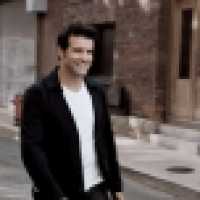