“You cannot stop this. You cannot escape it and you cannot turn it off. So, I’d appreciate your kind consideration in this matter, Sir or Mam, would you please turn it the FUCK UP.
I present to you: the queen of queen bees, phoenix from the ashes risen. World record holder with a score of 2 GAZILLION in Tetris, two time recipient of the Nobel prize for Super-Foxiest female EVER, and wartime consigliore to the Costa Nostra.
She’s the founder and CEO of Konichiwa Records. The most decorated professional on the streets, with a perfect track record since kindergarten when she used to whup schoolboy ass.
In this world of tension, pressure and pain, she’s known for her wisdom, compassion and relentless determination in the quest to GET PAID.

She is Robyn. The most killingest pop star on the planet. A pint-sized atom bomb dosed to the tits on electric and dispensing wisdom in three-minute modernist pop bulletins on the post-adolescent condition. ‘Robyn’ is also a collection of ultra-concise pop moments – that rarest of things, a classic pop album. It’s a sad-eyed, super-strong battery of nuclear-powered pop. It’s the best weapon she’s got.

Robin Miriam Carlsson was born in Stockholm in 1979. She spent the first seven years of her life touring with her director father and actress mother in their Constructivist-inspired theatre company. At the age of 13 she was discovered by Swedish pop singer Meja when singing a sad, self-written song about her parents’ divorce in a school workshop and was immediately signed to BMG. A debut album of R&B-influenced pop in 1995 saw her paired with future Britney-hitwrangler Max Martin, and the global success of the sweet, soulful single ‘Show Me Love’ in 1997 cemented Robyn as an international pop star.
Shellshocked by the lack of artistic control offered by her label, however, Robyn migrated to Jive records for her third album, but felt disillusioned by their attempt to ship her to America to be shoehorned into the pre-fabricated Xtina template that was depressingly omnipotent in 2002.
“I think the third record I made was a big compromise,” she says. “I felt like it wasn’t fun anymore. Once you make the record and you give it to the record company, it’s not your record anymore! And I hated that situation. “I was going backwards. I wasn’t doing what I wanted to.”

In 2003, Robyn returned home, defeated, to Stockholm. Upon returning, she stumbled across a new CD by a mysterious local brother-sister duo. The CD, titled ‘Deep Cuts’, was a passionate, hallucinatory reading of pop music carved from geometric blocks of pure texture. Karin Dreijer Andersson and Olof Dreijer called themselves The Knife, and with ‘Deep Cuts’ they had sketched a blueprint for a kind of abstract future pop. “I was amazed by it,” gasps Robyn. “I thought it was the best thing I’d heard in years. I just felt like wow this is really what I’ve always been looking for – and not only was it good, it was Swedish.”
Energised by the potential atom-splitting that could occur if she harnessed her own piercingly honest pop to The Knife’s uncompromising, peculiarly Swedish energy source, Robyn approached Karin and Olof to work on a potential single.
The result was ‘Who’s That Girl’ – unquestionably one of the best pop singles of the past five years. Strapping herself into the very heart of The Knife’s towering, architectural synthpop – a shifting, interlocking grid of colour and beats, hard enough to break your fists on – Robyn emptied all of her frustration, insecurity and desperation. The lyrics, specifically, railed against her contractual purgatory, but ‘Who’s That Girl’s loaded despair resonates powerfully with anyone – any girl¬¬ – left beaten by the capriciousness of gender or image politics. In the song, Robyn soars. Her anger is rocket fuel for the titanium-strong music which encases her, projects her, makes her indestructible. Although Robyn had always written songs, this stark piece of brutalist pop should be considered The First Robyn Song.
Unbelievably, her label hated it.
“They just thought it was weird,” sighs Robyn. “They just didn’t understand it. I guess they didn’t consider it to be pop music, which I think is crazy. It’s TOTALLY pop music! Modern, inventive music – that’s what pop music should be.”

Exasperated to the point of resignation, Robyn looked to how her new comrades Karin and Olof self-financed and released their work. In a completely unprecedented move for a mainstream pop artist, Robyn bought herself off her label.
“So then I was free but I was not really happy to go back and sign with a major label again. It was totally illogical. Why would I do that? I felt like either I quit making music or I start my own record company.”
Six months later, Robyn was CEO and founder of Konichiwa Records. In her back pocket she had ‘Who’s That Girl’, the opening song for a new album that would be her story. She also had a new sidekick. Klas Åhlund is the main man behind Teddybears, Stockholm’s amazing bricolage pop group who have variously been fronted by Annie and Neneh Cherry, Iggy Pop and Mad Cobra.
“I’d never thought we were gonna work together, cos what Teddybears do is… boy music.” Robyn giggles. “I didn’t think he could embrace a girl perspective.”

Nevertheless, the first thing Klas brought to the Konichiwa table was the basic frame for a song depicting intense unrequited love, that Robyn would colour in with every kind of craving. ‘Be Mine!’ is just beautiful. Every word that Robyn sings – ‘It’s a good thing tears never show in the pouring rain/As if a good thing ever can make up for all the pain’ - sounds like it’s being crumpled up and clutched to her chest.
In the middle-eight the ‘song’ just falls clean away, leaving a spoken word Polaroid that chews at your heart: “I saw you at the station. You had your arm around whatsername. She had on that scarf I gave you, and you got down to tie her laces. You looked happy - and that’s great. I just miss you, that’s all.”
“I wanted to feel like I was 15 or 16 again, and big emotions were REALLY BIG. Y’know, if you were in love you were IN LOVE and if you were heartbroken you were HEARTBROKEN!
“Cos that’s what people want music to be for them,” explains Robyn. “I know I do when I listen to music.”
The sparse production to ‘Be Mine!’ makes its simplicity all the more brutal. Just strings that slice in, all gasps and sighs, and a flutter of drum machine that emulates a racing pulse.
“I still wanted to write pop music,” affirms Robyn. “I wanted it to be simple, I wanted it to be sparse, and I wanted it to be hard.”

Robyn may now be the kickingest label CEO around, but she was out on a limb here. A lifetime’s earnings had been ploughed into a dream. The conflict of liberation and anxiety about the project, as well as galvanizing Robyn, seemed to polarise her character. One half of ‘Robyn’ was all hip-thrusting-fuck-you-cool, but in the gentle suite of ballads that wind everything down there is a smaller, sadder Robyn.
“I’m a Gemini maybe that’s what it is!” she exclaims. “Because I am this very outgoing person people think that I’m always sure what I’m gonna do, which I’m not! I always question myself! The perfect example is ‘Konichiwa Bitches’. That song was made because I was so scared! I was like ARGH what am I DOING? I had to like bang my chest and go RAR! I’m the shit! I’m the best girl in the world!”
‘Konichiwa Bitches’ is Robyn’s signature tune. Over pixellated hip-pop beats, Robyn unloads like a manga Missy Elliott. Its biggest inspiration was Bugs Bunny, and the way he’d totally front on Yosemite Sam with big-ass ACME boxing gloves.
Robyn describes it as “a concentrate of attitude. It’s like a baby ninja! Like really dangerous but really small and cute! It’s like a child with a huge machine gun.” It kicks yr face. It’s Robyn.

‘Robyn’, in some ways, is emblematic of a move towards a more autonomous pop industry, with artists working creatively in egalitarian partnerships rather than at the behest of a major corporation.
“I think it’s the future,” Robyn enthuses. “I don’t think you’re gonna have big record companies in five years. Even three. They have not adapted to this new world where people download music or don’t buy stuff that they don’t like.
“I think record companies felt like they were immortal. The industry was like WAAAGH,” Robyn beats her tiny chest. “Y’know, we’re The Shit. We can do whatever we want. We have all this money, and you just have to do whatever we tell you to do and you can’t own it.”
Really though, what ‘Robyn’ represents is the story of one ass-kicking little blonde woman who blasted through the industry bullshit and made a startling, profound, honest pop music all of her own.
It is music with one message.
Be your own star. 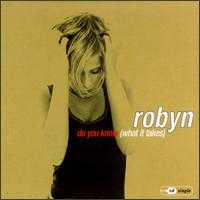