"…Throughout this unfettered debut…THICKE accesses the freedom of rock without losing soul's textural and structural pleasures."

"This is my new favorite band."

A new musical world order is again on the horizon. First there was rock, then pop, soul and hip hop - long hair, crew cuts, afros, conkalene, baggy pants and cornrows - the convergence of these cultural and musical influences have created a NuAmerica music. Ushering in this new sound is singer/songwriter/ producer, Robin THICKE.

"The (musical) boundaries are being broken down more than ever before," Thicke states. "Rock and hip hop are intertwined with gospel and classical. I think that music is more open than it's ever been."

After cutting his professional teeth behind the scenes, producing tracks for popular artists like Marc Anthony and Brian McKnight, Thicke is now ready to step center stage with his own musical vision. "For a while, I just thought I'll produce and write for other people," says Thicke. "It wasn't until the last year and a half that I decided I've got to put it all on the line. I've got to commit every day and every note to my album."

Though Thicke is forging a new musical path - one that refuses to be categorized - its roots are firmly planted in a rich musical legacy embraced the world over. Take some Marvin Gaye falsetto, Jim Morrison psychedelia, a pinch of Stevie Wonder, the rock to the hip hop of the Beastie Boys and a little Latin salsa, and you have an idea of the conversion of musical cultures that comprise Cherry Blue Skies, Thicke's debut album on NuAmerica.

Thicke caught the musical bug early, studying his heroes with an almost scholarly zeal. "I began listening to gospel singers at an early age, which led me to people like Aretha Franklin, which eventually led me to Stevie Wonder and a lot of R&B," he recalls. "It wasn't until my teenage years that I started to open my heart to rock & roll and different kinds of world music."

Now, with a&r direction from his friend and mentor, André Harrell, Thicke is pouring all of his creative energies into his own project. Backed by a solid lineup of musicians, including drummer/co-producer Pro J, guitarist Bobby K. Keyes, and guest bassist Sean Hurley of Vertical Horizon, Thicke - who plays keyboards and handles all of the vocals himself - spent the better part of the last two years crafting Cherry Blue Skies.

Much like his musical heroes before him, Thicke has managed to keep one ear to the past and the other in tune with the future. "It's a part of my personality," he says. "I love to party . . . I want world peace . . . I like sexy music . . . and I feel my music should reflect all of that."

All of those facets of his personality are on proud display on Cherry Blue Skies, the debut release from NuAmerica, the new label imprint from the architect of ghettofabulous and music entrepreneur André Harrell and acclaimed hitmaker Kenneth "Babyface" Edmonds.

Whether it's the infectious rhythm of "B Alright," the sinuous funk of "Oh Shooter," the haunting imagery and unbowed optimism of the title track, or the emotionally naked ballad "Stupid Things," Thicke navigates a melange of musical genres with a consummate skill that belies his young age.

On "Oh Shooter," Thicke draws inspiration from a harrowing personal experience. "It's actually about a real bank robbery. I was seventeen, and these guys came in the bank and I heard, 'Everybody get on the floor.' Nobody really took it seriously. And then it got a little louder. I turned around and a guy was walking towards me, pointing a gun right at my face."

Though that track has autobiographical elements, Thicke is quick to point out that he draws inspiration from anything and everything around him. "There are times when I'm writing about true-life experiences; if something happens, I go right to the piano." Regarding the songwriting process, Thicke says, "Sometimes it starts with a phrase or a note. There is absolutely no rule for inspiration. I keep my mind open at all times and my ears ready to be touched by something that's inspiring."

The album's title track, with its plea for peace and understanding, was also inspired by a real-life experience, in this case, the terrifying events of 9/11. "At a time like that," says Thicke, who was staying at the Soho Grand hotel in lower Manhattan at the time - with a direct view of the twin towers - "you figure out what's most important to you -- and it's family and friends."

In addition to the album's more serious fare, there are several cuts sure to heat up any dance floor. The opening track "B Alright," a tongue-in-cheek, woe-is-me lament brings to mind Marvin Gaye's classic party groove, "Got To Give It Up (Pt. 1)." And the album's first single, "Alone," which uses Walter Murphy's disco-era hit "A Fifth of Beethoven" as its musical bed, is another contender for dance-hit status.

Harrell, who also executively produced the album remarks, "I realized that ghettofabulous was no longer the forward moving force of young America - it had become a mainstream idea. However, there wasn't a uniform definition to the way music should sound for this generation." Harrell continues, "While I was in LA, I bumped into Thicke, whose musical vision was in tune with my own. I knew Thicke had the style and the talent to successfully articulate a distinctive new sound for a NuAmerica."

And like the protagonist in "B Alright," LA-raised Thicke remains optimistic, whether it's regarding the future of music or the future of our world. With all of its divergent musical currents, Thicke hopes Cherry Blue Skies will usher in a nu- breed of artist, one with across-the-board-appeal, unencumbered by any musical or social boundaries. 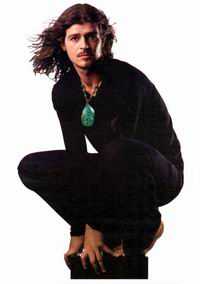