With fists in the air and boot up the ass of bourgeois capitalism, River City Rebels are shouting their anthems of the working class and small town pride louder than ever. "No Good, No Time, No Pride", the Rebels third chapter of their jarring careers is their way of flipping off any naysayers that held them back in the past. This is the year of the Rebels!

Forming River City Rebels in a small town outside of Burlington, VT when the majority of the members were still in high school, they have spent the past three years on Victory Records building one of the most diverse and solid followings of any band in the punk scene. They were quickly picked in the Spring of 2000 when founder of Victory Records, Tony Brummel discovered this rag-tag band of punk rock misfits. Brummel took a chance on the seven young men and their raucous old-school punk style. The Rebels quickly made a name for themselves in punk circles around the world with the release of their first two records, "Racism, Religion and War" and "Playing to Live, Living to Play." After much maturing and a few line-up changes the Rebels have found a combination that works. GG Allin-esque front man, Dan O'Day, known to many as the "Bopper", leads The Rebels' rebellion. His provocative stage presence and no holds barred attitude attracts a rowdy slew of followers. He is backed by an unruly bunch, with Eric Schmidt on drums and Chris Jukosky on bass forming the backbone of the battalion. On guitar, Chris Hamm explodes with guttural rock n' roll guitar riffs while Rylan Perry and Brandon Rainer finish the audience off with their airborne sniper horn attack.

River City Rebels are evidence that punk is not dead. "No Good, No Time, No Pride" will prove to be one of the most inspiring records of the punk revival with their fist pumping choruses and sing-a-longs around every corner. "No Good, No Time, No Pride" showcases the Rebels' unique ability to create infectious punk anthems with powerful, politically aware lyrics. The Rebels give a much-needed kick in the pants to the punk scene, combining the insolence of the Sex Pistols and unforgettable sing-a-longs reminiscent of The Clash.

River City Rebels' crass horn laden punk rock has helped land them on some of the biggest punk rock tours around including the legendary Dead Kennedys and two of horn punkÕs biggest acts, Less Than Jake and Voodoo Glow Skulls. The Rebels will kick off "No Good, No Time, No Pride" with dates with Roget Miret and the Disasters, Mustard Plug and Tsunami Bomb. They will tackle 2002 and charge their way into 2003 with one of the most promising new albums in punk rock. River City Rebels are on their way to making history. 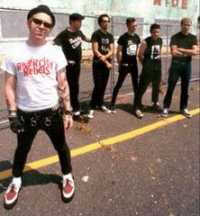