Rihanna is a North American R&B/Soul singer. Most of the worldly population would also classify her as a tradtional dancehall singer; who has splurged onto the entertainment scene unexpectedly.

Rihanna was born on the Caribbean island of Barbados in 1988. Through the years, particularly during her pre-teen and teenage years, she would sing to friends and family only for amusement purposes. One day, a mutual friend of Rihanna introduced her to music producer Evan Rogers, whose home base is in New York.

He asked Rihanna to perform whatever song that came to mind for her. Rogers was obviously suprised on what great talent Rihanna had. Immediately, both Rogers and Rihanna made demos containing close to twelve tracks including the 2005 smash hit Pon De Replay and mailed the demos out to various recording comanies including Def Jam Recordings where Rihanna would eventually be signed onto.

Shawn Carter, also known as simply 'Jay Z' in the urban community, who was recently crowned as the CEO of Def Jam, was enticed by the mature sounds of the talented singer, and immediately started recording for her upcoming LP disc.

Of course Rihanna completed the recording of her LP disc entitled Music Of The Sun. She amazingly did not just sing the notes to the songs that can be heard on the album, she also co-written a majority of them. She has gone to various radio stations around the United States promoting her vivacious single, "Pon De Replay," and her album, which will be released on August 30, 2005.

Rihanna says she is inspired by such artists like Alicia Keys, Beyoncé Knowles and Mariah Carey. She also states that on her album, you'll not only listen to reggae, but you'll hear ballads and other R&B fused tracks. Well, we can't wait 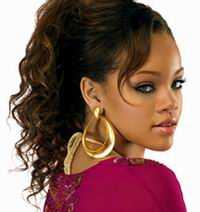